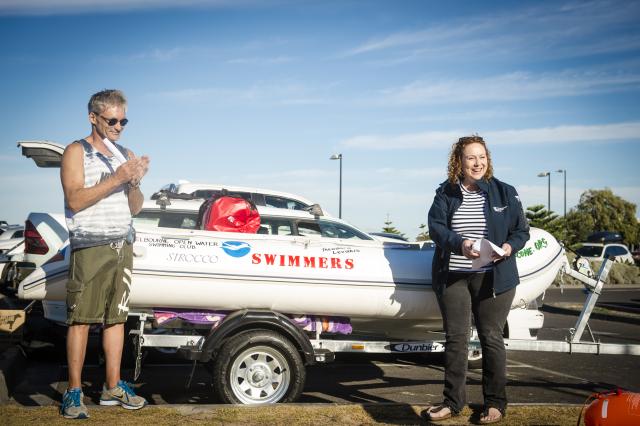 The Melbourne Open Water Swimming Club launched its new safety boat this weekend, just in time for its first Williamstown to Altona Classic.

The boat, which cost nearly $10,000, is hugely important to the club as it allows it to keep tabs on swimmers at big events like the Williamstown Classic in Altona.

“If the worst case scenario happens, rescuing swimmers and bringing them out of the water to shore, it allows us to have coaches with radios and equipment, with first aid kits right there on the water with deep water swimmers.

“It’s going to allow us to do things like… you’ve heard of people crossing the English Channel from England to France, we can do that stuff here in Melbourne.”

For the swimmers who braved the water on Sunday, Mr Bryce said for most participants it was the biggest physical challenge they had ever had.

“It’s a really good experience for us to help people take on something that they find difficult, that they’re a little scared of,” he said.

Ms Horne praised the club for their fundraising efforts which enabled them to purchase the new safety boat.

“This represents a leap forward for the burgeoning sport of open water swimming in Victoria,” she said.

“I had the honor of naming the boat ‘Theodora Levakis’ after one of the club’s contributing members who was an absolute beginner when she first signed up and now swims regularly in Williamstown Beach.”