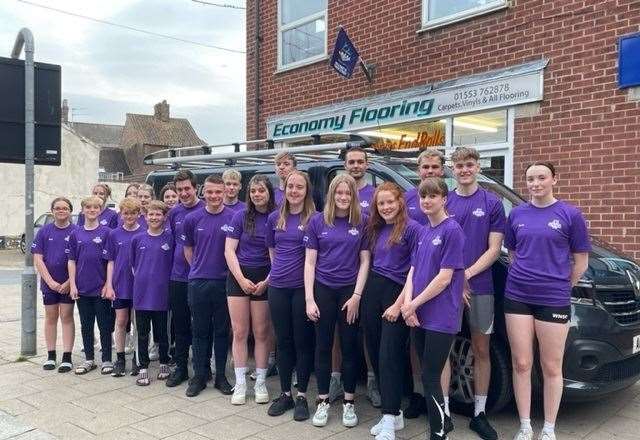 West Norfolk had several swimmers qualifying and competing in the championships for the first time, alongside more familiar faces.

Head coach Vanderloo said: “It has been particularly satisfying to see a number of younger faces step onto the regional stage alongside their more experienced teammates for the first time and achieve their own results.”

Tobias Oglesby, Freddie Laws, Joe Wells and Nathan Wells provided West Norfolk’s foursome for the relay events and they took fourth place in the 4x100m freestyle and bronze in the 4x100m medley.

Oglesby has made four individual finals across the championships, with a best finish of sixth in the 50m backstroke.

Joe Wells set a personal best in heats of the same event before posting a season-best five times in the rest of the competition.

Lee clocked 1 minute 14.84 seconds for fourth place in the 100-metre breaststroke, while Campbell-Maughan came home in 29.08 seconds to place eighth in the men’s 50-metre backstroke.

Distance specialist Esmie Kidman finished fifth in the 1,500-meter freestyle and sixth in the 800-meter freestyle, both of which were held on a ‘declared heat winner’ (HDW) basis with final placings determined by the times of the innings.

Rhys Burrell swam a PB hat-trick in the 200-meter breaststroke and 50- and 100-meter butterfly, while Robert Addis and Jake Lammas came away with a PB and two season-best times each.

Both Nedas Tkacenko and Tom Ball competed in the 50m freestyle, with the former achieving a PB and the latter also swimming in the 100m freestyle with a time of 57.92 seconds.

Olivia Skittrell and Pemberley Hornigold were both in action for the 50-metre breaststroke, with swim times of 39.98 and 39.76 seconds respectively.

Meanwhile, Erin Woodrow swam a time of 29.87 seconds in her 50-meter freestyle.

Elyn Lauder and Chloe Bellamy each ran a 200 meter event each.

Lauder completed the butterfly in 2 minutes and 43.42 seconds, while Bellamy swam a personal best 2 minutes and 38.61 seconds in the backstroke.

It is in the ‘Age Groups’ segment of the competition for swimmers aged 14 and under that the majority of West Norfolk’s new faces have emerged.

Jamie Wilson, 13, a “dual affiliation” swimmer for Wisbech SC and West Norfolk, and Alex Pattison, 12, both made a big impact.

Pattison joined his teammate in both 400-meter events, after Wilson earned a well-deserved sixth-place finish in the medley.

In the 100-metre butterfly, the pair set new personal bests to advance to the final, where they then improved their times again as Pattison took seventh place and Wilson earned bronze.

The 200 meter event for the same shot saw Wilson make another final, where he capped off a stunning weekend with a silver medal.

Luke Pattison, Belle Ringwood and Milly Johnson recorded PBs at 12 and under.

Theo Ryan competed in the 100 meter backstroke, swimming a time of 1 minute and 27.01 seconds.

Kristina Sutika-Totlebena; Wiktoria Marcinek, both 14, and Thomas James were in action with the former swimming the best time of the season in the 200m breaststroke. Marcinek repeated the feat in the 200-metre backstroke and James achieved a PB in the 200-metre butterfly.