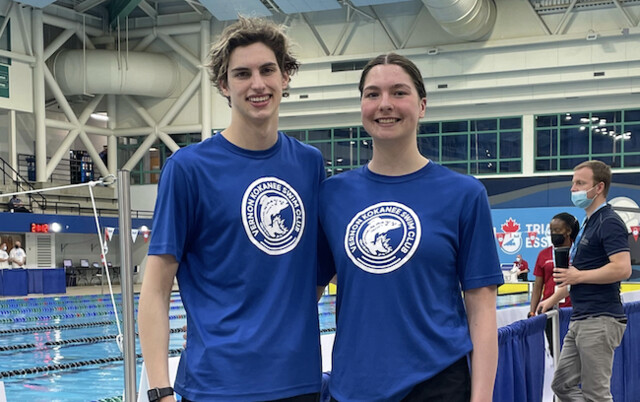 It’s been a busy month for the Vernon Kokanee Swim Club.

Two swimmers represented the club at the Bell Canadian Swimming Trials in Victoria, April 5-10, which was used to select national teams for the upcoming World Championships, Commonwealth Games and Pan Pacific Junior Championships.

Her first place came in the 50 breaststroke as she finished sixth overall.

Additionally, competing in the 50m backstroke, Murphy finished in 23rd place with a time of 27.79 and finished the swim meet with all three races setting the fastest times.

“The experience in Victoria has been amazing,” said club head coach Jason Brockman. “For Ryan and Alexanne, qualifying in the second races of the finals and also having a better time in the evening races, it was great. To have done this in their first senior national competition is even more amazing. I’m sure it’s been a real eye opener for them to see some of the best swimmers in the world competing and seeing their own potential for the future seeing that they can compete with them.

At the Askews Spring Thaw main event, VKSC won the points trophy in a close race with the Kelowna Aquajets. Several swimmers managed to improve in all of their races, including Zion Ellis, Norah McIntyre, Noah Muligan and Violet Jenner. Julia Russell managed to place first in her six races over the weekend.

The next swim meet is April 21-24 in Edmonton for the Western Canada Championships.