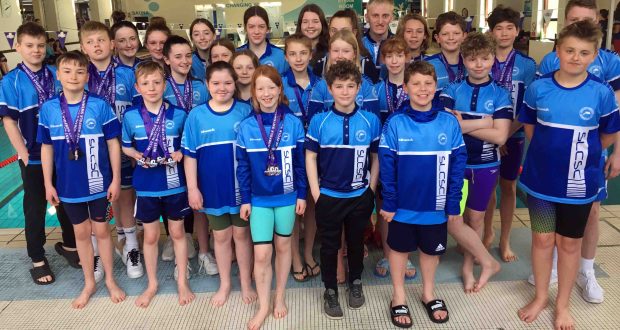 A staggering 212 medals were collected by swimmers from South Lincs Competitive Swimming Club as they shone on many fronts at the West Norfolk Open Meet.

Wilson competed in 12 events over the weekend and collected no less than ten gold medals and one silver.

Her highlight of the weekend was the 200m freestyle, where she lowered her personal best (PB) en route to one of her gold medals.

En route to his supreme title, Wilson won his gold medals in all strokes and distances from 50m to 200m.

The highlight of his weekend was a new record time in the 100m backstroke as he won gold.

Top Boy Lamb also won his gold medals in a range of strokes and distances, including his favorite individual medley (IM) events.

Away from the big two, nine-year-old debutant Susannah Poll won gold in the ten-year-old girls age group 50m breaststroke in a PB.

Sigourney Bolton put up a host of strong performances in the 13-year-old girls, winning four golds and five silvers, including a host of PBs.

She won silver in the 200m freestyle (PB) and added a hat-trick of bronzes (100m freestyle, 50m backstroke and 50m freestyle) including two more PBs.

Heidi Woodrow also competed in the 11-year-old girl’s category and won no less than six gold and two silver medals.

The best times were recorded in his golden strokes in the 200m breaststroke, 50m backstroke and 100m backstroke.

Meanwhile, Lilli Bowman (15 girls) set a new record in the 200m individual medley en route to a bronze medal, before adding another bronze in the 200m freestyle.

Another impressive was Sophie Wilson (girls 14) who collected a hat-trick of gold medals in the 200m butterfly, 200m freestyle and 50m butterfly.

Four silvers and a bronze followed for her, along with a handful of PBs.

Charlie Ward set six new record times in seven races and won a pair of bronze medals for the 12-year-old boys. His medals both came in the freestyle events (100m and 50m).

She also set new records in her 100m freestyle, 200m butterfly and 200m freestyle wins during her golden weekend.

Will Vere had a busy weekend in the boys 13 age group where he set 12 new PB times in every event he swam in.

He also notched eight finishes between fourth and sixth place in his events.

Aidan Evans (boys 13) won an impressive 13 medals at the competition.

Sophia Shackleston won a silver medal in the 200m backstroke for the 12-year-old girls with a huge new record time.

She also swam a heroic 200m breaststroke as, despite losing her goggles at the start, she swam to another new PB.

Lexie Hamilton had a busy weekend as she contested every event in the 13-year-old girls program.

Highlights for Hamilton saw her win gold in the 200m backstroke (PB), before adding bronzes in the 100m backstroke and 200m freestyle (PB).

A hat-trick of bronze medals followed in the 100m and 200m freestyle and 200m individual medley events.

He went on to win silver medals in the 200m backstroke and 100m butterfly, both in record time.

But Sadler saved his best swim until the final event, where he flew over the 50m butterfly to win gold in another PB.

Another to impress was Jess Herriott, who set four new records in as many women’s 14-year-old events.

Her best performance was a fourth place finish in the 200m backstroke.

Archie Robinson was competing in the 13-year-old boys age group and set new record times in the 200m breaststroke, 100m backstroke and 200m freestyle. He managed seven finishes between fourth and sixth place.

Lloyd lowered his 200m backstroke record by more than 28 seconds, then made a 33-second improvement in the 100m butterfly before another big personal best of 25 seconds in the 200m individual medley. His best results have been five finishes of fifth or sixth in his age group.

In the 200 backstroke, Ravell lowered his PB by 35 seconds and lost 33 seconds in the 200 breaststroke to finish in 4.03.32 minutes. His best results were fifth and sixth.

More PB came from Mackenzie Poll, who set new best times in all seven events he entered over the weekend (15-year-old boys).

He set new records in the six events he competed in, with particularly impressive improvements in the 100m and 200m freestyle.

Reuben Owen was also in fine form setting new personal bests over a range of strokes and distances.

He won a bronze medal in the 12-year-old boys’ 200m breaststroke, where he lowered his personal best by more than 25 seconds.

Owen also had four finishes between fourth and sixth place.

In the butterfly events, she set new record times before winning a bronze medal in the 50m backstroke.

Leo Oldershaw had a successful encounter in the ten-year-old boys age group.

He won silver medals in no less than seven events – and for good measure added a bronze medal to his personal tally. Oldershaw also set a host of new personal bests over the weekend.

Her older sister Elysia Oldershaw set the best record for 14-year-old girls seven times, with her biggest improvement in the 200m freestyle. She also managed a sixth-place finish in the 50 backstroke.

Aliyah Mohamed won a bronze medal in the 50m breaststroke for 11-year-old girls with a new best record. She then set new record times in five other events, including the 100m freestyle.

Zofia Nowak won two medals in the 14-year-old girls’ category setting a new record time in the 50m breaststroke of over 14 seconds.

Kieran Ng had an extremely successful encounter. He competed in 12 events and won no less than 11 gold medals and one silver.

He also managed to set new PB times in all the events he swam.

Some of Ng’s best swimming came in the 200m individual medley with a huge improvement to win gold.

There were also big improvements in the 200m backstroke and 200m freestyle.

He made a significant improvement in his 200m backstroke with a new personal best.