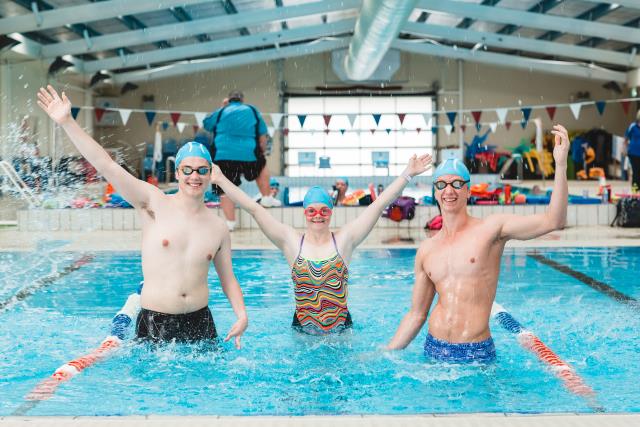 When a club has existed for 140 years, it inevitably has stories to share.

Tucked away in a closet in the club rooms of the Kardinia Aquatic Center was a world record.

The certificate commemorating the achievement is now proudly displayed by the club.

It’s one of many stories the club hopes to recognize and share when it celebrates its 140th anniversary next week.

The club calls on all past and present swimmers, coaches, officials and members to celebrate this milestone at a reception at the GMHBA Stadium on Saturday 14th May.

“I’m not a Geelong resident, but I feel like almost one in three people I speak to were linked to the club at some point,” said committee member Jessica O’Brien.

“We’re trying to bring all of these people together to celebrate 140 years of aquatic history in this town.

“Not only have water sports grown dramatically over the 140 years, so has the club…and we want to bring the community back, to come together to share those stories.

“There will be many stories in these 140 years that people will not remember or even hear before.”

The club’s history dates back to 1882 when the Geelong Western Swimming Club was formed.

Bathhouses were first established on Geelong’s waterfront in the 1850s, and by the 1870s six bathhouses were in use, leading to the formation of several swimming clubs, including the Geelong Western Swimming Club, based in Western Beach.

At first there were separate clubs for men and women – the Geelong Western Ladies Swimming Club – which merged in 1959.

The club then changed its name to Geelong Swimming Club in 1970 and established its base at the Geelong and District Memorial Swimming Center – now known as Kardinia Aquatic Centre, where it still resides today.

“At the time [at the start] they were swimming in the cold ocean, so it was much more of a summer sport, whereas today we train all year round,” Ms O’Brien said.

“At the time they also did synchronized swimming and diving, and at one point the club also had a water polo team. We’ve covered many different water sports throughout our history, so now we’re talking about competitive swimming.

Mr Benson said the club had always been very successful in the pool throughout their history.

“The club has a strong track record when it comes to performance,” he said.

“We had the champion diver from Victorian Australia; with synchronized swimming, we had champions in that; some of our members have competed in the Commonwealth Games.

“Commonwealth Games captain was Peter Doak, a member of our club, and he was also an Olympian.

“He held a world record, as did another of our members Tony Strahan, so we had some good performances in the pool.

“But more important than that has been our role in the community to bring people with aquatic hobbies together in an environment where they can have fun.

Mr Benson said the area’s love of water has played a big part in the club’s continued success for 140 years.

“There are said to be a dozen surf clubs within half an hour’s drive here and so swimming – swimming properly, not just surviving in the water – is a big part of Surf Coast culture,” he said. -he declares.

“If you want to do triathlons or any of these other water sports, you have to be a reasonable swimmer.

“We have taken this into account and provided this opportunity for anyone who wants to improve in swimming.

“We want to make Geelong Swimming Club the center of excellence for swimming in the G21 area. So if you have a child who wants to play one of these sports, Underwater Hockey or Surf Lifesaving, we want to be where they come to swim.

But the other reason [we’ve manage to survive for so long] is in general, we just love our sport.

“In an egalitarian society, sport puts everyone on the same level. We have doctors and specialists and all kinds of people with really delicate and difficult tasks, but once they get in the pool and swim their two or three kilometers, everyone is the same.

“There is a real camaraderie between the swimmers in a kind of kinship spirit.”

Mr Benson said maintaining and enhancing the club’s community spirit was his primary goal as chairman.

“When I got this role six or seven years ago, what I wanted to improve were the pathways to bring people into the club and keep members involved in the club longer,” he said. -he declares.

“We found that when our young swimmers were nearing the end of school and heading to college, some were starting to drop out, so we bought a swim school.

“This swimming school now has over 1300 enrollments and is said to have over 40 staff.

“Kids have the opportunity to go learn to swim and either join a fitness team, where they are not members of the club, or they can join the club.

“They can start their training, go through all the different teams to get to the point where they either don’t want to commit anymore or they’ve reached the pinnacle of what they want to accomplish in competition, and then there’s the opportunity to employ them as swimming instructors.

“So now we have a pathway for our children to continually join in and learn to swim. Once they have completed their training, we have someone ready to teach.

In addition to its success in the pool, the club has also had great success outside of the pool.

In 2020 the club received three awards at the Victorian Disability Sport and Recreation Awards.

Ms O’Brien said the club had placed a strong emphasis on inclusion, which would be celebrated on the 140th anniversary.

“We’re talking about participation and inclusion – that’s what’s really important and that’s something we’re very proud of because those pathways for people with disabilities are needed in sport,” she said. .

“That’s why we created our foundation alongside the club, because a person with a disability has additional needs that can cost more.

“To participate in sport, a person with a disability may have to travel with a companion or other things like that which can create barriers to sport participation.

“So that’s where we have our base of operations, so they can achieve their goals of getting where they need to go, or competing in competitions they want to compete in or have qualified for.

“So it’s very important that we support them along the way, and they make us incredibly proud.”

The club also received the Club of the Year award from Swimming Victoria last year, which recognized their success in and out of the pool.

Mr Benson said it was an achievement the club were extremely proud of.

“Winning the Club of the Year award is a real feather in our cap and something we are very proud of across the club,” he said.

“Our performance side has gone well too, we have an Australian age group record holder, that individual recently won two gold medals. We have a state age champion, which means that individual has earned more state championship points than any other individual in Victoria.

“It’s been a wild ride, but it all culminates in our 140th year – so it’s a good time to bring everyone together and celebrate the club.”