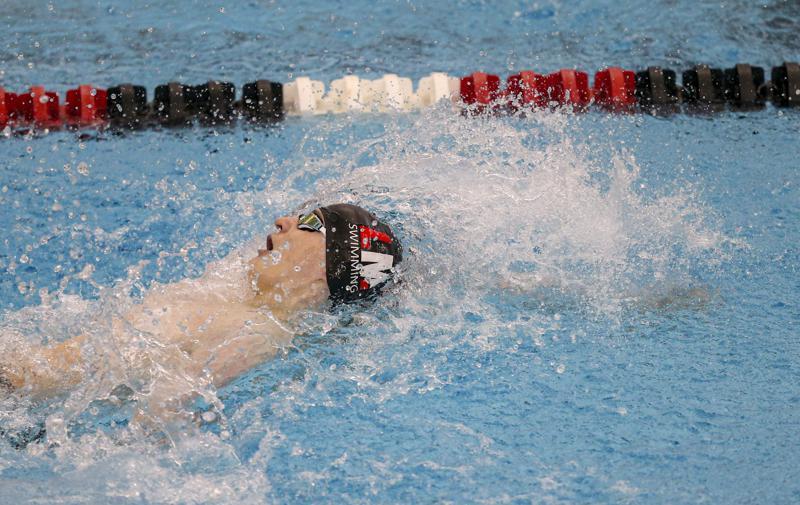 Linn-Mar’s Aiden Carstensen competes in the fourth inning of the 100 backstroke at the 2021 IHSAA State Swimming Championships at Linn-Mar High School in Marion on Saturday February 13, 2021 (Andy Abeyta / The Gazette)

Swimmers cover many miles in the pool and extra time in the weight room in an effort to achieve their best performance at next month’s state competition in Iowa City.

However, when you put four top-six ranked teams in a mid-season fixture, competitive juices take over.

This was the case at the Linn-Mar Invitational on Saturday. Waukee, the reigning state champion and first in the standings, won the tag team title, edging No.2 Iowa City West by 18.5 points for the title after falling to the Trojans on Thursday in a double encounter hotly contested. No.6 Pleasant Valley finished third, one point ahead of No.5 Linn-Mar.

Western coach Byron Butler said a meeting of this caliber is rare during the regular season.

“Anytime you get the chance to swim against the reigning state champions and against a team from Linn-Mar that will definitely compete for a trophy and a team like Pleasant Valley, you appreciate it,” he said. -he declares. “We’re about five weeks away (from state competition) and I was incredibly happy with the way we played today. We had a fantastic performance in many races.

“I’m delighted not only with the way we swam, but with the way everyone swam,” he said. “When you bring kids together like this, you want a quick meeting and we have a quick meeting. We had four of the top six teams in the state here so it was a great opportunity to get up and go.

Waukee has won six of 11 events, led by stars Drew Reiter, Asher Havenhill and AJ Abram. Reiter and Havenhill both won two individual events while Abram won one. West’s only win was in the 200 medley relay, but the Trojans racked up some big points thanks to their depth. Linn-Mar has won three events, leading Aiden Carstensen’s school record of 20.99 in the 50-yard freestyle.

“It was a great race for Aiden today,” said Belin. “He’s just a player. He loves competition. He loves being that guy you rely on in the end. And even though he’s been swimming, there are things that we as coaches can make him do better.

Ironically, West and Linn-Mar will meet again in a double meet Tuesday night in Coralville.

“It will be another great meeting,” said Butler. “Meeting this competition will make us better in the championship season.

Belin said there would likely be adjustments from both teams in the duel. He added that attention to detail is what will be key for his team the rest of the season.

“It’s the little things that count,” Belin said. “When you look at these little things, I don’t really have to say the same. The children know. They know what they have to do. So hopefully what I see will be cleaner training stuff next week. This group just needs to take this next step and they certainly can do it. “