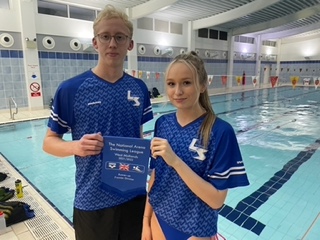 LEAMINGTON SPA AMATEUR SWIMMING CLUB (LSASC) has qualified for the National Arena Swimming League National “B” Final for the first time in the club’s 137 year history.

The team, aged 9 to 19, contested three legs in the fall – in a mix of individual and team relay events.

And excellent swimming and teamwork saw Leamington qualify for the regional final in December where they faced some of the best clubs in the Midlands.

LSASC needed a top-two place to secure their place in the national final and clinched second place after picking up 182 points to book their place in Cardiff.

Head Coach Graham Nash said: “Qualifying for the Arena League National ‘B’ final is an incredible achievement for the club, especially considering the more than 400 clubs in total competing in the league.

“We are incredibly proud of all of our fantastic swimmers – they totally deserve to be in the final. I also want to thank everyone involved with the club – in what is a great moment in our history.

The club finished just six points behind eventual winners Leicester Sharks and were 40 points clear of Boldmere A in third place, with Redditch, City of Derby and Worcester making up the rest of the table.

And after a thrilling regional final, in which every swimmer battled for every point, the club will hope to continue their success in this weekend’s National ‘B’ final at Cardiff International Pool where they will face nine other top performers. clubs in England and Wales.

This is an incredible feat for the club who continue to go from strength to strength after qualifying for the Arena League Junior Grand Finals for the first time in their history in 2019.

Leamington’s coaching staff is led by Head Coach, Nash, and Director of Swimming, Mike Hartwell, who are supported by dedicated volunteer coaches and teachers.

If you are interested in becoming part of this exciting club, LSASC offers a full range of swimming programs – from beginner lessons from the age of four, through to senior competitive training programs to qualify to compete in national championships. .

The national “B” final takes place this weekend on Saturday 5 March.