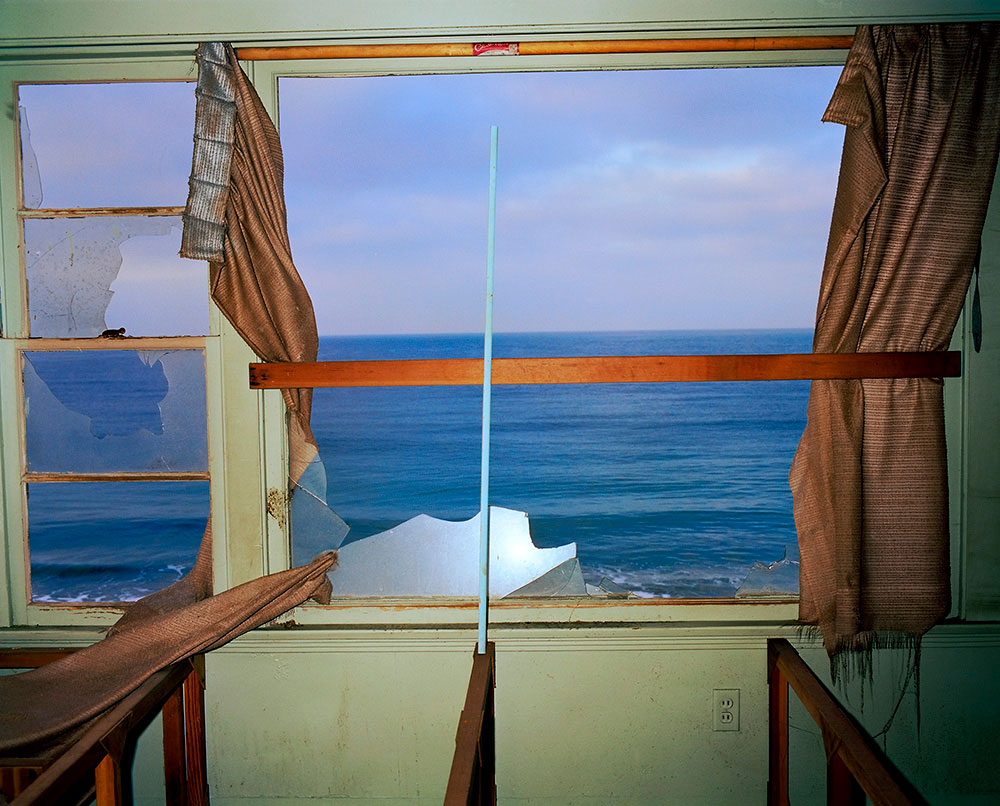 For more than fifty years, John Divola has been making photographs that live within the conventional boundary separating the function of photography as document of fact and producer of fiction. In countless, mostly site-specific series, Divola intervenes in the found conditions of her environment, adding both textual and graphic elements that provide subtle accents and, in some cases, completely transform the atmosphere of ‘an area. The theatricality inherent in his approach can often mask the observational and incidental quality of the images themselves – passages where artifice and intention give way to depicting the world as we experience it. The tension between these structures of visual registers Drunk Swimmingan exhibition that brings together two corpuses created forty years apart, and which shows both the coherence of Divola’s orientation and the intensification of its effect throughout this period.

The nine prints hanging in the first and largest room of the exhibition are from the “Zuma series” (1977-1978), which remains the most vivid and indelible expression of Divola’s style and the ideas that motivate him. Working in an abandoned house on Zuma Beach in Malibu, California, Divola treated the space a bit like a studio, if only because he couldn’t afford conventional and here he could experiment freely. . At the same time, the house was used by the local fire department for training and instruction, and also visited by others who, perhaps like Divola, wanted to leave their own marks. Against this backdrop of practical necessity and incremental destruction, Divola painted symbolically evocative marks and signs throughout, photographing the house from the inside while gazing through blown windows at waves and sunsets.

There’s a restlessness in the “Zuma” images that stems from Divola’s flash and branding: they suggest we’ve stumbled upon something cryptic and beyond our comprehension. In Zuma #21 (1977) and Zuma #71 (1978) his flash causes the red paint to spurt from the walls and windows, while the silver looks almost burnt white. The blues in Zuma #33 (1977) seem to glow and radiate like no blue has ever done before, a sensation made almost plausible by comparison with the scorched wreckage covering the ground. Even where Divola seems to have left the color as he found it, as in Zuma #3 (1977), it is exaggerated by its flash, made strange and strangely resonant. In Zuma #75 (1977) we see the way the house steadily frames the cyclical presence of ocean and sky behind it, moving us back and forth, always offering to distance us from the dramatic action before us.

These images show us Divola approaching photography with a dual lens, using it to produce what he calls “artifacts of an experience” on the one hand, and to capture the expressive potential of light on the other. whether present in the world or transformed. by its materials. The camera is just one instrument among many in a performance replete with them, and in “Zuma” these components are as much at the center of the images as the unity into which they are brought together by composition and light. . This back and forth, the feeling that these images can detach themselves from within, is exhilarating. When we move on to “Daybreak” (2015-20), however, we can see that the inner tension has completely smoothed out, meeting what seems to be the fullest realization of Divola’s art.

Made in an abandoned housing complex at the disused George Air Force Base in Victorville, California, “Daybreak” reveals a spectacular extension of Divola’s methods of intervention in space. Whereas in “Zuma” we see a kind of staccato marking that largely interacts with the camera flash, in “Daybreak” we see walls painted with raw numbers, numbers, and location coordinates; photographic paper fixed to the wall then lacerated, life-size black circles seeming to emerge from a bottomless source; and phrases suggesting prior consciousness (“Sleep Without Dreams”). All of this is captured with the soft glow of natural light filtering into the houses through shattered windows and blown roofs, openings which, unlike “Zuma’s” house, do not lead us beyond the building and into a certain evocative distance. . If we are transported elsewhere by these images, it is by Divola’s manipulation of space within the frames themselves, and how the light within them seems an event in itself.

It’s hard to convey the beauty of these thirteen contact gelatin silver prints if you haven’t already seen them in person – they possess a depth and nuance of tone that, in their own way, are as discordant as the color of “Zuma”. Divola printed them on a special paper called Lodima which is designed for contact printing (an earlier iteration, named Azo, was a favorite of modern masters like Edward Weston), and employed a developer who was commonly used with him , called Amidol, which he mixed. These materials allowed him to dramatically expand the tonal range of these prints, resulting in creamy whites and richly textured blacks, silvers that seem to rest entirely on the paper – in short, prints that seem contain light as much as they save it.

What’s remarkable about going from “Zuma” to “Daybreak” is how, as the prints become considerably smaller and noticeably quieter on the wall (“Zuma” prints are approximately 44 by 54 inches while those of “Daybreak” are relatively modest 8 by 10), the aesthetic effect of the work seems to intensify. “Daybreak” asks us to stand close and take a closer look, to wonder what measureless depth is contained within the sculpted black triangle that hangs from the wall in George Air Force Base, dawn, 4_2019B_15A (2019). Divola’s interventions not only accentuate the expressive qualities of these spaces, they themselves generate metaphors.

2022-05-11
Previous Post: Lordsfield Swimming Club has received a £2,500 grant from the Hampshire and Isle of Wight Community Foundation
Next Post: Members of the Bishop’s Stortford Swimming Club rub shoulders with Olympic medalists Adam Peaty, Duncan Scott and Anna Hopkin at the British Championships in Sheffield