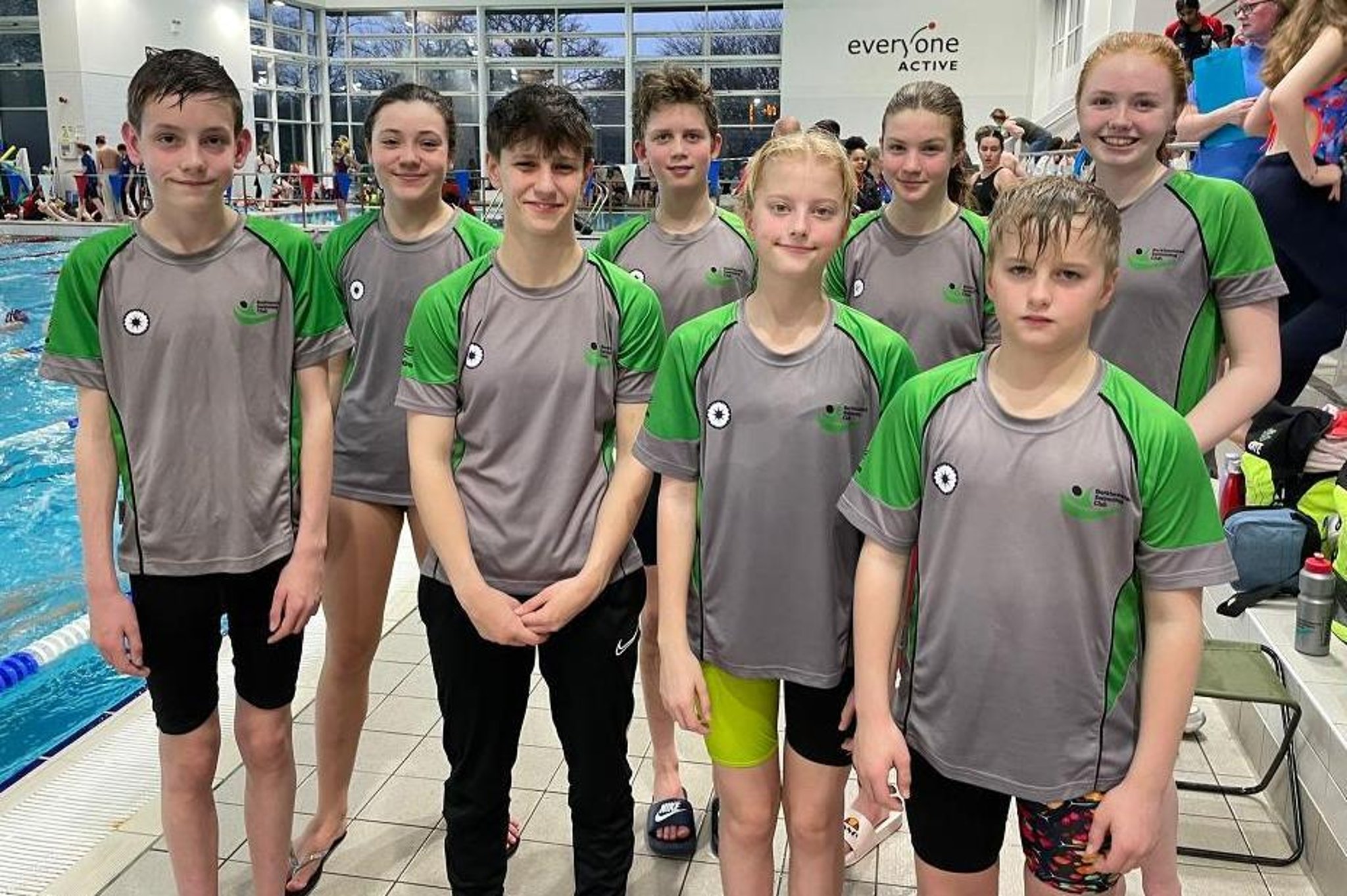 Berkhamsted swimmers were scattered this weekend with Tracy Van Deventer and Mark Strakosch leading the way for our group of masters swimmers at the Swim Wales Masters competition in Swansea and Bracknell Masters respectively. Meanwhile, a group of 17 juniors made the short trip to Watford’s Woodside Stadium for the regional qualifier.

At Woodside, with coach Evie Watson taking control of the reins for the first time in open competition, Tamsin Moren got the ball rolling with 2:38.60 (5th) for the 200m individual medley, but the first medal of the club came in the 100m freestyle with Kate. Hopper continues his upward trend, losing nearly 2 seconds to record 1:03.56 for a heat win and a 15-year gold medal. There was also a pb for Mia Maslen-Wollington who similarly lost almost 2 seconds, to go 1:40.96 in the same age group. Tamsin Moren and Poppy Awdry, in his first meeting for the club, clocked 1:04.72 and 1:14.70.

The last swimmer in the first session was Will Franklin in the 50m Fly 46.83.

In the evening session, Moren completed her competitive swim in the 400 IM by cutting nearly 5 seconds off her best as she learned to pace the event, 5:34.18 for 4th place overall.

Just 2 events later she was back in the pool for the 200m breaststroke in direct competition with Hopper and just came out on top stopping the clock at 2:58.40 with Hopper diving inside 3 minutes for the first time with 2:58.87.

In the 100 backstroke, Maslen-Wollington clocked 1:21.23, then it was the girls’ 50 breaststroke. Valeria Antonini started things off with a Heat win in a 46.10 pb for 5th followed by Lucy Franklin, also pb, 47.07 (9th). Maslen-Wollington finished 15th in 43.65 and once again Hopper and Moren faced off in the 50m Breast, the throw-in just going to the slightly older Moren, in 38.04 to Hopper’s 38.14 but Hopper took the consolation with 5th in age and his second regional qualification time.

Sunday dawned bright and early with the reverse events.

The girls’ 100 breaststroke brought another bp for Lucy Franklin, 8th in 1:45.84, hitting nearly 2 seconds off her best as she gains confidence. Moren finished 8th in 1:21.29

In the women’s 50 butterfly, Nell Coster tore up the form book, moving from the 5th seed to the silver medal, improving by ¾ of a second to 33.47. Hopper did 32.93 and Moren 33.62 before Josie Reid confirmed the little one’s strength in the Fly events, particularly their traditionally strong 50m races, taking gold in 31.71 to finish the penultimate session.

Mark with his Bracknell Masters medals

Will Franklin finished his swim with 49.72 in the 100m breaststroke and the last event, the women’s 50m freestyle, saw 7 swimmers from the club.

It was a splendid weekend for the club as they returned to competition after reinvigorated training after Covid restrictions and showed the benefits of the work they are doing.