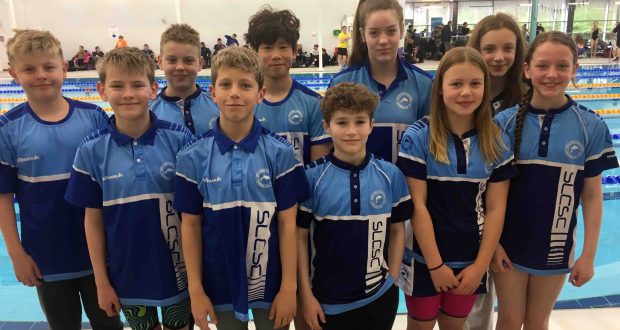 A South Lincs Competitive Club youth team were in action on the first two days of the East Midlands Regional Championships – and it was another success across the board.

The weekend saw the 11, 12 and 13 year olds from the Spalding-based club take on the blocks through strokes and distances, joined by the girls who took on the 1,500m freestyle and the boys the 800m freestyle .

For many swimmers, this was their first opportunity to compete in regional championships, as due to COVID-19 the event has not taken place since 2019.

However, the swimmers rose to the occasion and acquitted themselves in top form as they battled heats and multiple finals en route to personal bests (PBs) and numerous medals.

Aaron Sadler kicked off the action as he took on his favorite butterfly events. He swam in the 50m, 100m and 200m butterfly heats and qualified for the finals of all three distances for boys in the 11/12 age group.

In the 100 butterfly, Sadler set a new personal best in the heats of 1.24.90, then improved on that in the final to take seventh place.

In the 50 butterfly Aaron clocked a great heat time of 35.33 seconds and I was just short of that mark and took a fifth place.

In the 200m butterfly, he set new records in the heats and the final by winning a bronze medal.

Teammate Charlie Bisby (11) had a busy weekend at the bottom of an age group double and the competition was all about gaining more long-course experience.

His best performances came in the 50m and 100m freestyle where he set new personal bests.

Frank Lamb started his campaign with a solid streak in the 100m butterfly swim for the 13-year-old boys, before taking sixth place in the final.

He also earned a solid fourth place in the 400m individual medley (IM) and was also a runner-up in the 200m IM – where he swam to fifth place.

Lamb’s finest run came at the end of the weekend in the 200m butterfly, when he posted a new personal best of 2.43.33 minutes in the heats. Amazingly, he then took four seconds longer in the final to clock 2.39.98 minutes for bronze.

Kitty Lamb was also in action, with the 11-year-old gaining valuable experience in a double age group.

However, she still managed to reach the finals – including setting an excellent new personal best in the heats of the 100m backstroke, finishing seventh in the final.

She also swam an excellent 50m backstroke qualifying for her second final, where she again placed seventh.

Lamb then scored a hat trick with strong results in the long 200m backstroke, where she lowered her personal best by more than four seconds.

There was also a two and a half second improvement for her in the 100m breaststroke.

Lucy Wilson was also competing in the girls 11/12 age group and finished with a very demanding schedule as she continued to qualify through to the finals.

She posted a new PB in the heats of the 200m individual medley to qualify for the final, where she took seventh place.

Wilson also qualified for the 200m breaststroke final, where she caught eight.

However, her best moment came in the 200m butterfly as she set a new record time in the heats again for the bronze medal.

Elsewhere, Sigourney Bolton has produced a host of standout performances.

She broke new records in the 100m freestyle and 50m butterfly, while in her favorite breaststroke events there were also finals to contend with.

Bolton clocked a fast time in the heats of the 50m breaststroke, then improved it in the final for fifth place.

In the 200 breaststroke, she repeated the trick, setting new records in the heats and final to claim the bronze medal in the 13-year-old girls.

He set numerous PB times throughout the weekend, with his best performance in the 100m breaststroke being a PB in the heats and a bronze medal in the final.

His finest moment came in the 800m freestyle, where he battled his way to a new best record and won gold in his age group.

He also finished fourth in the 100m backstroke final and seventh in the 200m breaststroke.

There have been more medals in the 800m freestyle for South Lincs swimmers.

Among the boys of 14, Oscar Goldsmith also won the gold medal.

In a determined swim, he was just one second off his PB time which had been set a week earlier in Leeds.

Alfie Bisby set a new 15-year-old boys’ personal best and won silver in his age group. He was followed at home by Alex Sadler and Oliver Sorrell, as they in turn set new PBs for fifth and sixth place respectively.

Hannah Bruce (13 girls) managed to qualify for several finals, finishing eighth in the 200m individual medley and sixth in the 200m freestyle final.

Aidan Evans was just a tenth of a second off his best record in the 50m backstroke before setting a new record in the 200m butterfly for ninth place in the 13-year-old boys’ final.