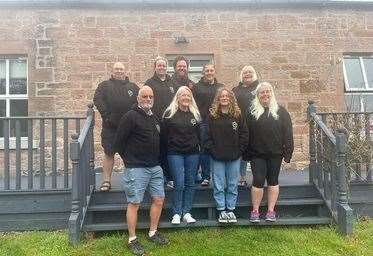 A team of five swimmers, two crew and two officials, most of whom were from Kingfishers Swimming Club in Scarborough, completed a relay round trip from Loch Ness between Sunday and Tuesday with a final time of 26 hours, 48 minutes and 4 seconds.

It was a Scarborough swimmer named David Morgan who was the first to make a double solo crossing of the loch in 1983, setting an unrivaled record time of 23 hours 4 minutes at the age of 20.

Kingfishers open water coach Paula Ambury said her team was aiming to break the record but was caught out by a technical foul on Sunday.

She said: “Our boat broke down just three hours before departure. I don’t know how, someone must have been watching from somewhere, but within 45 minutes we managed to find another boat and a pilot. So, the swimming went ahead anyway.

This attempt had been three years in the planning and was originally staged for 2019.

“The swimmers were amazing,” Ms. Ambury said. “We would have broken the record if the boat hadn’t broken.

“However, it’s not a matter of time, we really wanted to do it, and we did it. But it was so dark – I’ve never been so dark.

“It’s the coldest water you can swim in and the darkest. Even on the sunniest day, it would still be so dark underwater.

“It was a pleasure and a privilege to help bring this race to a successful conclusion.”

Maddy Adams (18), the youngest swimmer on the team, said: “It was an absolutely amazing experience and to be able to finish it was even more special for me.

“This challenge was great for changing my mind on the day of the exam results (August 18), which was great.”

“It was quite weird, my shoulder was giving up and at one point I wasn’t sure I could finish it, but I did a little sprint and luckily I got to the end.

“I love swimming and it takes me everywhere, and it’s such a beautiful part of the world!”

Do you want to react to this article ? If yes, click here to submit your thoughts and they may be published in print.