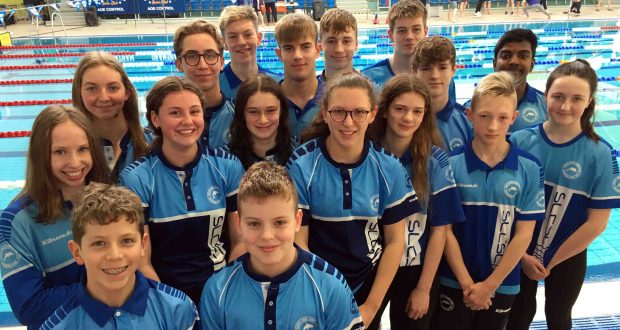 An 18-member team from the Spalding-based club were in action competing in the 400m freestyle and 400m medley events, with impressive results.

Daisy Rummery got off to a strong start as she battled her way through the 400m freestyle to claim bronze in the girls 16+ category – and she also won bronze in the senior women’s championship in this test.

Rummery maintained a strong pace throughout the race and hit the wall in a season-best time of 4.34.92 minutes.

Matteo Monaco broke the five-minute mark for the first time in the 400m freestyle, facing boys significantly older than him in the 13-year-old category.

However, his personal best (PB) time was good enough for the gold medal.

He also took silver in the junior men’s championship, before scoring a PB in the 400m individual medley for bronze.

Oscar Goldsmith also competed in the 400m freestyle and 400m individual medley – and was rewarded with two gold medals for the 14-year-old boys.

He touched home in a new club record 4.25.99 minutes to claim his first gold medal in the freestyle, before repeating the trick in the individual medley with another double record 5.05.20 minutes.

Goldsmith won the Junior Boys Championship title in both of these events.

There was another South Lincs free kick in the 15-year-old boys age group of the 400m freestyle.

Alfie Bisby led the charge as he battled with teammate Alfie Robinson in their heat.

Alex Sadler won the silver medal with a PB time of 4.26.68mins and Oliver Sorrell collected the bronze medal, also in a new PB time of 4.35.87mins.

Bisby grabbed double gold by stepping onto the podium in the 400m individual medley in her age group with a new personal best of 4.57.74 minutes.

Once again he was followed at home by Sadler who took his second silver medal (5.07.80mins, PB).

There was also a double gold medal for Rico Bringeman as he took victory in the 400m freestyle and 400m individual medley in the 16-year-old group.

He was clearly a class apart and touched home in 4.10.87mins.

In the 400 IM, Bringeman established an early lead that was never to be contested before finishing in 4.36.81 minutes.

The talented teenager also won the Senior Men’s Championship title in both events.

In the 400m individual medley, Bringeman was followed by Luke Blanchard – who rode a great race.

His run ended in a fingertip finish that saw Blanchard claim silver just 0.01 seconds ahead of his rival in a PB of 4.48.42 minutes.

She swam with real determination to set a new record time of 5.37.97 minutes to make it a podium.

Ellisha Cookson was defending her 400m IM title, but with an injury it was always going to be a challenge.

She swam an outstanding butterfly section of the race and produced a strong backstroke section for her fastest attack speed ever.

Despite a fierce battle in the breaststroke, Cookson was unable to secure a sufficient lead to retain the gold medal as she was overtaken by her rival in the free section.

Still, she hit goal with her second-fastest time of 5.00.14 minutes to win silver in both the 16+ girls age group and the senior women’s championship.

Meanwhile, Frank Lamb was finally in action in his first championship event.

He swam the 400m individual medley in style to win gold in the 13-year-old boy category.

A quick opening section in the butterfly gave Frank an early lead as he moved to the backstroke where he swam vigorously to hold that lead.

Lamb continued his fine form until the end, setting a new record time of 5.26.78 minutes – and also won bronze at the junior men’s championship to add gold to his age group.