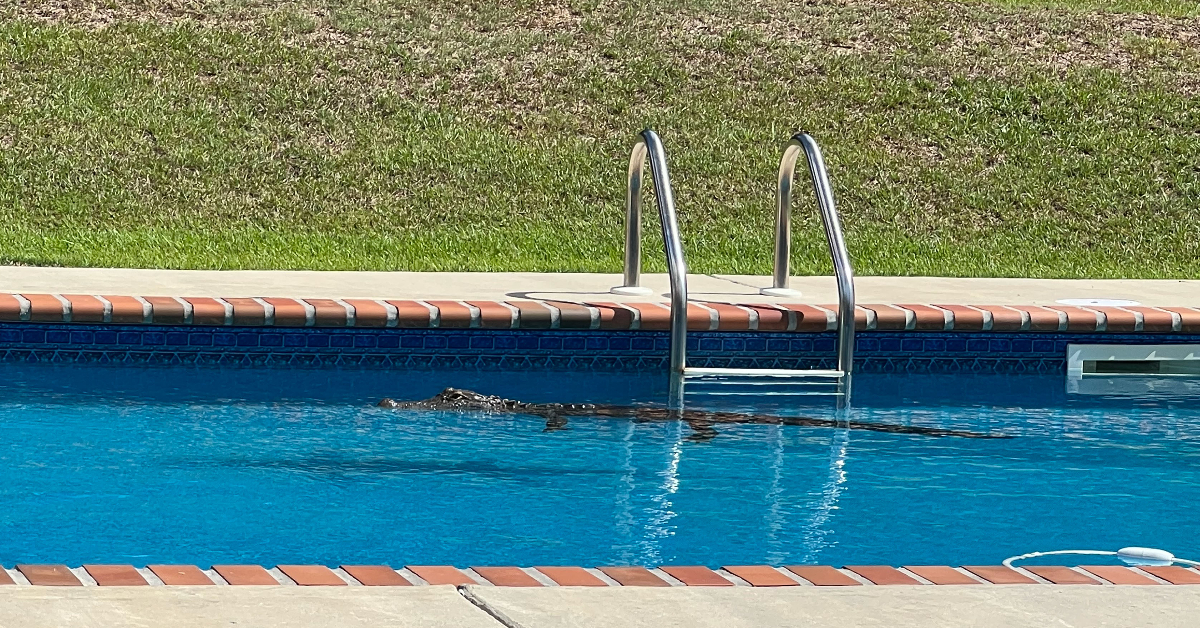 A 911 call came in just after 10 a.m. Friday, alerting local authorities to a menacing impostor: a 6-foot-long alligator in a swimming pool on Boundary Line Road in the community of Bovina.

Owner Sissy Hudson said the day started like any other. She had let her two dogs out of the house, was scratching the cat she and her husband, Clay, kept outside, and was getting ready to eat breakfast on her back patio before work. Clay had turned on the automatic pool cleaner, and it was dragging along the bottom – or so Sissy thought.

“I went out to have breakfast on the back porch, and (the alligator) was just floating in there,” Sissy said. “We have two dogs, so I threw them in the house, and we have a cat, so I had him put in the house too.”

From there, Sissy said, she didn’t know what to do or who to call. The one thing that was certain, however, was that she wanted the alligator gone.

“I called my husband, and he started coming home and suggested I call 911,” she said. “I felt stupid calling 911, because it wasn’t a fire or murder or an emergency; it was just an alligator somewhere it wasn’t supposed to be.

Warren County Sheriff Martin Pace, who responded to the scene, said that in an emergency of any size, residents should call 911 when they need help. Especially in the case of a troublesome alligator, Pace said it’s better to involve local authorities than trying to tackle the reptile alone.

While the Hudson’s yard was buzzing with activity as deputies from the sheriff’s office and staff from the Mississippi Department of Wildlife, Fisheries and Parks arrived on the scene and prepared the area for the removal of the animal, the multi-toothed alligator decided to swim a few laps underwater, occasionally surfacing.

Pace, along with MDWFP Lt. Lee Harvey, managed to remove the alligator from the pool and secure it within minutes. Estimated between 7 and 8 years old, the alligator is unscathed and transported to a more suitable environment.

“We never divulge where we release alligators, but I will say it’s a more natural habitat,” Pace said. “It’s a place where the alligator is free to be an alligator.”

2022-08-05
Previous Post: From swimming to walking, tips and exercises for a better quality of life for asthma patients
Next Post: UK marathon swimming team selected for European Championships