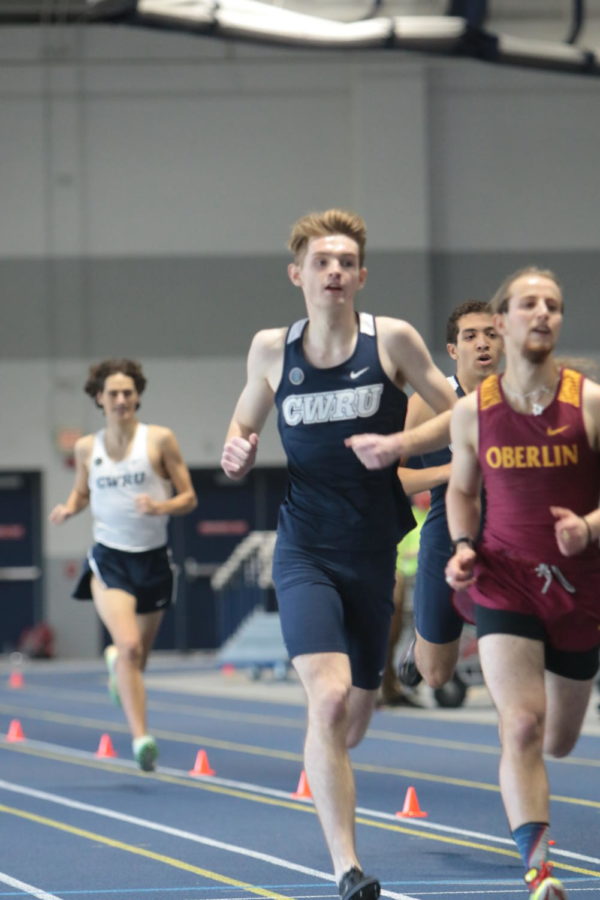 Last weekend, the Case Western Reserve University track and field team competed in their first meet of the year at the Otterbein Invitational in Westerville, Ohio, scoring incredible results in their third meet of the season. .

Third-year Jack Begley was the star and set a university record in the 3,000 meters after running the distance in 8:30.57 for sixth place. The previous record was set by former athlete Sam Merriman in 2018 (8:33.13).

There were three second-place finishes for the men’s team. Freshman Nicolas Lende took second place in the 400 meters (52.69), second-year Jack Wragan in the pole vault (4.00 meters) and the quartet of third-year Shaaban, Singer, Ben Pinkowski and Bryden fourth year. Moxley in the 4×400 meter relay (3:38.20). Pinkowski also earned a third-place finish, taking the position in the triple jump with a mark of 12.81 meters. Third-year Peculiar Nzegbuna was also third in the 60-meter hurdles (8.87) and third-year Liam O’Reilly, who was also third in the 5,000 meters (16:41.73).

The Spartans will next face off on January 29 in Berea, Ohio to compete in the Dr. Taraschke Team Challenge hosted by Baldwin Wallace University.

The men’s wrestling team won a record 2-1 at the Dr. Si Ostrach Duals, held at the Adelbert Gymnasium. The Spartans lost to Baldwin Wallace University (18-32) before defeating Waynesburg University (38-14) and Defiance College (28-27) to end the game. The meeting was held in honor of the late Dr. Si Ostrach, former CWRU Professor Emeritus of Engineering Wilbert Austin and former director of the National Center for Space Exploration Research, recognized by NASA as one of the 12 Super Stars of modern aeronautics. . Outside of the lab, Dr. Ostrach served as an educational advisor for the wrestling team and was a well-respected NCAA wrestling referee, having officiated for 35 years in his lifetime.

For Game 2, Callow got a pin at 2:23 in the 141-pound match while Gassel got the pin at 4:32 in the 197-pound match to headline the win over Waynesburg. Freshman Calvin Cai and fourth-year Thomas Gallagher had wins in the 157-pound and 174-pound matches, respectively, while fourth-year Patrick Hebreard and Manhattan Gatton had forfeit wins.

Callow, Jack Chipps, Gallagher, Gatton, Hebreard and Robinson were honored ahead of Saturday’s events for the ‘Senior Day’ ceremony. During their CWRU college career, the six athletes have won 13 doubles matches since the 2018-19 season and helped the team to a top-11 GPA Division III top 11 finish twice.

The Spartans, who have an even 3-3 record, will continue their season on the road in Wheaton, Ill., where they will compete in the Pete Willson Invitational hosted by Wheaton College Jan. 28-29.

For the diving events, freshman Abigail Wilkov put on an impressive performance, winning both diving events. She earned winning scores of 247.00 and 244.50 in the one meter and three meter dives, respectively. On the men’s side, freshman Trevor Elliot was the team’s best player in both events, finishing fifth in the one-meter dive (221.6) and three-meter dive (194.35). ).

First-year Peter Meng was the only other athlete to earn a first-place finish at the meet, winning the 400 individual medley (4:02.10). Meng also placed second in the 1,000-meter freestyle with a time of 9:31.76. Freshman Kate Menzer placed second in the 100-meter breaststroke (1:08.24), 100-meter butterfly (59.19) and in the 200-meter freestyle relay with freshmen Gabriella Chambers, Nara Lee and Simone Vale ( 1:39.66). Menzer, alongside freshman Vale, Caroline Schlessman and Chambers, also earned a third-place finish in the 200-meter medley relay.

The teams will host the final doubleheader of the season at the Veale Natatorium on January 29 and host Baldwin Wallace University. Prior to the start of the events, the CWRU will celebrate the graduating team members with the “Senior Day” ceremony.