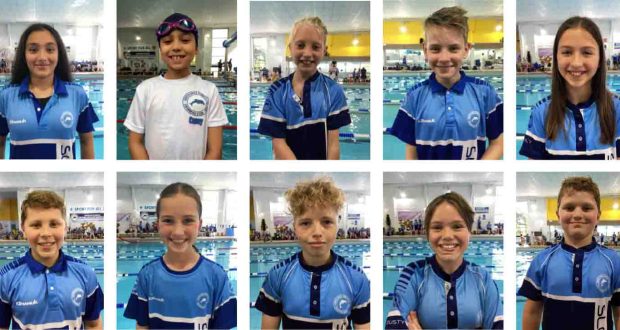 There was a string of great performances as the South Lincs Competitive Swimming Club held the first weekend of their Club Championships.

The event is a wonderful introduction to competitive swimming for new and younger swimmers at the Spalding-based club, as they are able to compete in familiar surroundings.

For older club swimmers, championships are an opportunity to update their times over a range of distances and strokes.

Senior swimmers are concentrating on their preparations for national championships in late July and early August – so they have to race without rest.

The first event was the very demanding 200m butterfly, with Francesco Monaco, 10, the youngest to face the event. He achieved a new personal best (PB) to take the win in the boys 10/11 age group.

Alex Sadler also had a great swim to cut his record time by almost five seconds en route to victory in the boys 14/15 age group.

The 100m backstroke was the second event of the evening and saw a host of new record times set by the club’s youngest swimmers.

In girls 10/11 years, new records were achieved by Sophie Bolton, who lowered her PB by six seconds.

Orlaigh Greer also improved by six seconds on her best time and Jess Worth dropped nine seconds off her best time to finish under two minutes for the first time.

Also impressive was Jess Herriott, who swam to a new best in the 14/15 girls age group and was thrilled to set her first county championships qualifying time.

In the men’s event, Alfie Robinson and, again, Bruce rode great races as they each took a second off their best time to take first and second place respectively in the 16-year-old boys and more.

The 50m breaststroke was also a popular event and Casey Hilliam showed great promise by winning the girls 8/9 age group.

It was Hilliam’s first time competing and is still only a member of the Junior Dolphins, the club’s teaching program.

There were a number of other swimmers who took on the 50m breaststroke for the first time, while Iris Lucas set a standard of 56.37 seconds.

Emily Taylor was right behind in her first-ever 50 breaststroke and fellow Dolphins member Ruby Dewhirst also posted her first time.

Zofia Nowak had the most remarkable swim in this event winning her heat by a large margin, stopping the clock in a very impressive 44.72 seconds.

In the men’s 50m breaststroke, Morgan Griffin clocked a whopping 12 seconds in the 12/13 age group.

Archie Robinson also had a good swim winning his heat with a new PB.

The last event of the first day was the grueling 400m individual medley (IM), in which there were some very impressive results.

Louise Herriott swam the event for the first time and ended up taking second place in the 10/11 year old girls with a new best record.

There was also a tremendous battle between Kitty Lamb and Lucy Wilson in their heat of the 400m IM.

Lamb led in the backstroke and breaststroke sections of the race, but Wilson slipped into the lead in the freestyle section and just managed to hang on to hit the wall first.

Another hotly contested fight took place between Oliver Sorrell and Alfie Robinson, as they battled for victory in their round and break the five-minute barrier for the first time.

Sorrell led in the butterfly section and Robinson gradually closed the gap and took the lead in the backstroke and breaststroke sections.

Both boys battled hard in the freestyle to finish the race and hit home in big new PB times.

On day two of the championships, the impressive Sigourney Bolton stormed to a new personal best of 24 seconds in the 200m backstroke.

Lilli Bowman took victory in the Girls 14/15 with a new best time, while Daisy Rummery took first place in the Girls 16+ with her own personal best.

Sorrell and Sadler battled hard in the boys 14/15 age group with the result being just 0.01 seconds behind.

It was Sorrell who hit rock bottom just ahead of his teammate.

Alfie Robinson set the fastest time of the night swimming with an excellent time of 2.12.64 minutes to take the victory in the boys 16 and over category.

Then there was a host of new record times in the 100m breaststroke. In the 10/11 girls, there were new records for Aliyah Mohamed, Lucas and Jess Worth, while Daniela Bringeman took first place in the 14/15 girls with another excellent swim.

Moreover, Andre Ubaviciute is back in competition after a two-year hiatus from the sport and has produced his all-time best performances. Here she set a new PB of 1.21.09mins.

Meanwhile, Matteo Monaco swam a stunning 100m breaststroke to hit the wall in a new record time and win the 12/13 boys age group.

Archie Robinson finished in third place in that age group with a massive swim where he lowered his best time by over six seconds.

Hilliam was back in winning form on day two taking first place in the 8/9 year old girls age group of the 50m freestyle in a PB.

There was another host of new record times for the 10/11 year old girls in the 50m freestyle, as Mohamed stopped the clock in 40.38 seconds and Greer set a new standard of 43.73 seconds.

There were also new PB times for Emily Taylor and Lucas who finished in 44.68 and 45.92 seconds respectively.

Herriott finished with a new fastest time of 47.35 seconds and once again Worth set another record time of 50.99 seconds.

Rico Bringeman set the fastest time in this event and broke the 25-second barrier for the first time by stopping the clock in a new standard of 24.93 seconds.

The Junior Dolphins swimmers then had the opportunity to run the 25m backstroke.
Vere clocked the fastest time of the night, finishing his race in an impressive 23.56 seconds.

There was a tremendous battle between Abigail Lowe and Emily Langley in the second run of the 25m backstroke. The two girls fought the full length, with the result coming down to the final blow.

The last event of the weekend was the 400m freestyle. There were some excellent first swims in this event, with Lamb posting a time of 5.35.09 minutes to take first place in the 10/11 girls age group and Bisby setting a new standard in her all first 400m freestyle.

Lillie Hamilton claimed victory in the girls 14/15 breaking the five-minute barrier for the first time, while Emma Croker took first place in the girls 16+ with a record five seconds .

In the boys 12/13 age group, there were early times recorded in the event by Reuben Owen.

Isaac Bowman and Charlie Ward battled it out in their 400m freestyle heat to hit the wall in 5.52.81mins and 5.52.95mins respectively.

Alex Sadler and Alfie Robinson also rode an excellent race in this event, with Robinson finishing strongest as they both posted new PB times.