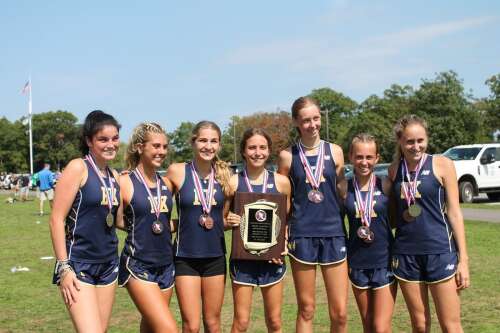 Senior captain Erin Marica took first place in the 100m breaststroke and 500m freestyle, qualifying for the States in the latter event, to lead the HK women’s swimming team to victory in their first meet of the 2022 season. Photo courtesy of Ronnie Thébeau

The Haddam-Killingworth women’s cross country team earned a first-place finish when they began competing in the Suffern Invitational at Bear Mountain, New York last week. The Cougars finished with a team score of 52 points to place ahead of 23 teams from New York and New Jersey in the race.

Haddam-Killingworth’s JV team recently competed in the CT River Valley Regional held at Cromwell High School. The Cougars finished in third place as a team by scoring 72 points in the game. Sophomore Margaret Robinson placed ninth in the race with a time of 23:52 for HK.

The Cougars also saw their JV team participate in the CT River Valley Invitational at Cromwell High School, taking first place in the game with an overall score of 20 points. Freshman Daniel McCourt covered the course in a time of 18:11 to take first place in the competition.

The Haddam-Killingworth women’s swimming and diving team won their first double meet of the season with a 90-77 home victory over the Old Lyme-Valley Regional-Old Saybrook co-op team on September 13. Alison Karam returns for another season as HK head coach.

The HK boys’ soccer team improved to 3-0 on the year after winning both games last week. The Cougars posted a shutout against Portland, then beat Hale-Ray to go undefeated so far this fall.

In their first game of the week, the Cougars hosted Portland and shut out the Highlanders in a 1-0 final on September 13. Three days later, HK was on the road to face Hale-Ray and picked up a 4-1 win over the Noises.

Junior Cole Merriam scored 3 goals and had 1 assist for the Cougars in their win over Hale-Ray. Freshman Phin Merriam scored a goal, second Ryan Lasusa had 2 assists and freshman Tetsu Imai contributed to the win.

On September 12, HK were on the road to play Portland and faced the Highlanders to a 1-1 draw. Sophomore Seanna Ruimerman gave HK a 1-0 lead when she scored with 10:25 left in the first half. Portland scored the tying goal with 17 minutes remaining in the second half. Junior Vyv Laurenza made 7 saves in the Cougars net.

Then, on September 17, the Cougars hosted the North Branford/Hale-Ray co-op team and posted a 5-0 shutout against the Thunderbirds. Ruimerman, junior Leah Walton and senior Julia Favalora all scored goals for HK in the first half. Freshman Maddie Sanderson scored on an assist from fellow freshman Chloe Felder in the second half. Felder then scored an unassisted goal to complete the 5-0 win.

The Haddam-Killingworth women’s volleyball team had three matchups on the schedule last week and came away with two wins to tie their 2-2 record this year. HK picked up wins over Cromwell and Old Lyme and also suffered a loss to Coginchaug in recent action.

The Cougars host East Hampton for their next game at 4:30 p.m. on Friday, September 23. HK will then hit the road to take on Hale-Ray on Wednesday, September 28 at 6 p.m.

The HK field hockey team won a recent two-game split to put their record at 2-1 in the young season. The Cougars suffered a loss to North Branford before bouncing back with a shutout win over Morgan in games last week.

On September 13, HK lost to North Branford by a score of 2-0 in a road game. Junior keeper Tea Norman made 12 saves for HK in the game.

Two days later, the Cougars hosted Morgan and recorded a 3-0 shutout against the Cougars at HK High School.

HK’s next match is a road tilt against Old Saybrook on Friday, September 23 at 6:30 p.m.

The Haddam-Killingworth football team traveled to Clinton to take on divisional rival Morgan for a Saturday afternoon game Sept. 17. The Cougars suffered a 30-23 loss to the Huskies at Peters Complex to improve to 1-1 on aggregate with a record. of 1-1 in the Pequot Conference Sassacus Division.

HK fell into a 30-0 deficit early in the fourth quarter of their game against Morgan. The Cougars rallied to score 3 straight touchdowns to cut the deficit to 7 points. HK attempted an inbounds kick with 1:18 to go, but the Huskies got the ball back and took the 30-23 win.

Senior Alex Phipps threw a 30-yard touchdown pass to Tate Callender to put HK on the board in the fourth quarter. Wyatt Solosky kicked the extra point to make it 30-7. Later in the frame, Phipps found Bryce Lacoss on a 15-yard TD strike for another HK score. Phipps followed by throwing the 2-point conversion pass to Kevin Gamache, cutting the deficit to 30-15.

Phipps then threw his third touchdown of the quarter with a 3-yard pass to Callender. Phipps went to Callender again for the 2-point conversion to make it 30-23, which was the final score.

HK host Cromwell-Portland (2-0, 2-0) for another division game on Friday September 23. The competition will start at 6:30 p.m. at HK High School.