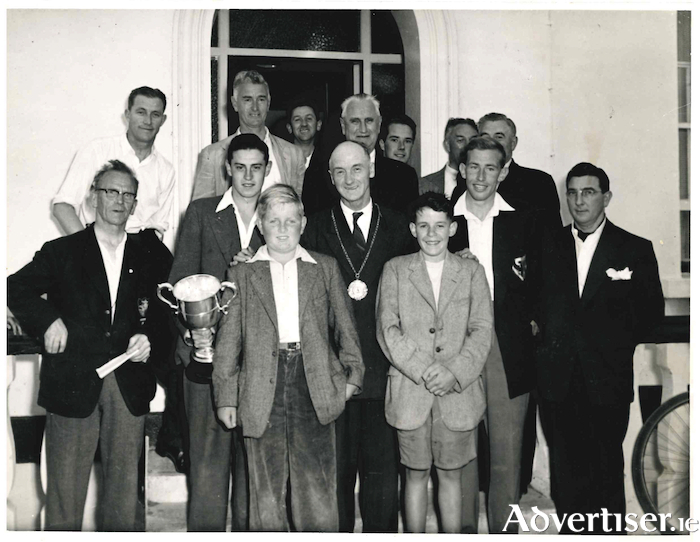 90 years ago, on August 2, 1931, world famous long distance swimmer Miss Mercedes Gleitz attempted to swim from the Aran Islands to Salthill. She did indeed manage to swim from Inis Meán to Spiddal in 18 hours 43 minutes, a distance of 18 miles as the crow flies, but it was estimated that with currents etc. she covered a distance of almost 30 miles. Two days later, she demonstrated swimming in Salthill and presented a cup to the Chamber of Commerce to be presented to the county school that had the most swimmers in relation to its student count. She aroused a lot of interest in the sport, which had grown tremendously a few months earlier with the formation of two clubs, the Blackrock Swimming Club and the Galway Swimming Club. This competition guaranteed between the clubs and quickly allowed the standards to be raised.

GSC was formed in October 1930, the inaugural meeting was held in the old Empire Theater. Among those in attendance were Wally Anderson, Harry Blake, Michael Lydon, John Joe Geraghty, Canon Davis, Ms Watson, Ms Ward, the Kineen sisters, Jack Curran, the Rev Galley, a Presbyterian minister, Kevin Larkin, Jim Geraghty and Jimmy Cranny. Joe O’Brien was elected first captain, Eamonn Hartmann the junior captain and Eddie Diffley the junior vice-captain. The secretary did not use a minute book so unfortunately there is no record of club proceedings.

In 1955, Pat Broderick gave the sport a boost in the west by winning the Liffey Swim. A few years later, Brendan Watson had just been selected for a gold medal at the national championships. It must be remembered that there were no training pools back then, so Western swimmers could only train during the summer months and were always at a disadvantage in competitions.

One of those who shouted the loudest for an indoor pool in Galway was Jimmy Cranny. He was the dominant figure of the CGC for around 50 years, during which time he taught generations of Galwegians to swim, often in the most miserable conditions. Many will remember being knee deep in the water on Blackrock’s shore, shivering with cold, as Jimmy demonstrated the arm movement and told us to stay “flah hout” in the water. He was a tough builder, but he took away the fear of water and made thousands of young people swim. He has made a huge contribution to improving the quality of life in Galway and it was only fitting that the Leisureland swimming pool bears his name.

One of the first competitive events hosted by GSC was an annual Prom Swim, a handicap race from Blackrock to Palmer’s Rock. It was first launched in 1933 and was won by Eamonn Hartmann. It has been taking place since the end of August with a single break of a few years during World War II. Men compete for the Claude Toft Cup, women have competed for the Jimmy Cranny Cup since 1951, the boys ‘race first took place in 1966 and the girls’ race in 1976.

Our photo was taken outside the Forster Park Hotel after the 1955 event and probably after several cups of Bovril and shows, front row from left, Jimmy Cranny; Joe Hegarty, the winner with the cup; Billy Fitzgerald; Peter Greene, Mayor of Galway; Brendan Watson; Pat Broderick; and Claude Toft. In the background, Jack Cheevers, Jack Browne, Henry Blake and Joe Fahy.