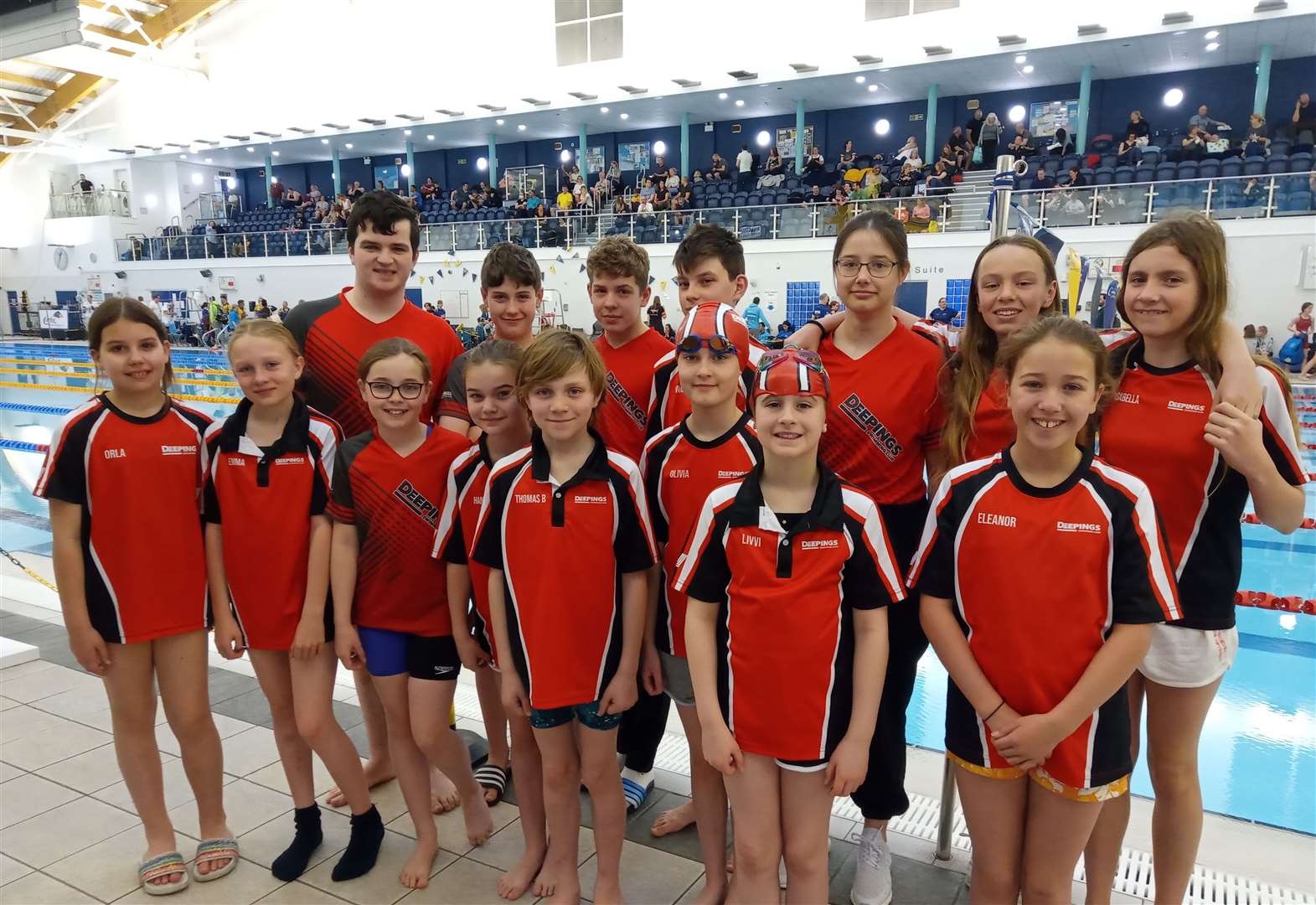 Competing against a top field, Deepings came away with 29 medals – six gold, eight silver and 15 bronze – with all members of the 38-man squad, some of whom were racing in a 50-man pool. meters for the first time, achieving personal bests and showing exceptional skills.

In her first ever 100 butterfly race, Ashton won the gold medal in an impressive time of 1:38.78, nearly six seconds ahead of her closest rival.

A second gold medal was won in the 100m backstroke, followed by a silver medal in the 100m freestyle. He set new nine-year-old age-grade club records in all three.

Demonstrating his versatility on all four strokes, Ashton won three bronze medals in the 200m individual medley, 50m backstroke (both new club records) and 50m freestyle, and set his sixth club record in the 50 m butterfly to crown an excellent weekend.

His sister, Sadie, proved the swimming gene runs strong in the Hunter family with three medals of her own, including gold in the 200m butterfly – setting a new club record Deepings in the long course in the process – more l silver in the 200m backstroke and bronze in the 100m backstroke. All were swum in new long course personal bests.

Competing in the 14-year-old age group, Jacob doubled in the middle distance events with gold in the 400m individual medley and 400m freestyle, the latter with an excellent record of 5:06, 42.

He won his third gold medal in the 200m butterfly and added two bronze medals in the breaststroke in the 100m and 200m.

Millie Herrick achieved the unusual feat of winning medals in all four freestyle events in the 15-year-old age group, with silver in the 50m sprint and 400m mid-distance events, as well as bronze in the 100m and 200m.

Deepings club captain Harry Cardell was his usual role model of consistency, picking up silver in the 16/O age group in the 200m individual medley and bronze in the 100m butterfly and 200m free swim. He set new long course records in both 200m events.

More butterfly glory was to follow across the age groups as the club showed their improved quality depth since moving to Stamford Endowed Schools earlier this year.

In a fiercely contested race, he just overtook a rival swimmer to win silver in the 50m backstroke, before adding two bronze medals in the 200m individual medley and 200m freestyle.

Penny Baxter completed the medal haul with a fine bronze medal in the 16/0 200m breaststroke.

Lynn Chapman, head coach of the Deepings Swimming Club, was delighted with the performances in the club’s first long-course competition in eight months.

“We had a lot of swimmers who had never competed in a 50 meter pool before, but none of them were impressed with the opportunity,” she said.

“Everyone has improved their skills since the start of the season, and they are now benefiting from the hard work in training.

“I was particularly pleased with the excellent team spirit by the pool, with swimmers encouraging and supporting each other.”

A trio of masters swimmers traveled to Nottingham to represent the Deepings Swimming Club at the ninth annual Calverton and Bingham Swimming Club Masters Open Meet.

Tony Baskeyfield, Kerys Arundell and Paul Smith-Shelton have competed in 14 races and finished in the top three 12 times, with one first, eight second and three third places.

Tony and Kerys also took the podium in the Best Men’s and Women’s Age Group competition, with Tony taking silver in the 65-69 category and Kerys taking bronze in the 35-39 age group.

Paul narrowly missed making it a hat trick, finishing fourth in the group 50-54.

Tony has never finished outside the top three in his six events.

Kerys, who recently returned from surgery for an ankle injury, earned three second places, in the 100m backstroke with a new personal best of 1:37.00, in the 50m backstroke and the 100m freestyle.

Paul’s best results came in his favorite breaststroke, where he finished second in the 50m and 100m events, the former with a new best time of 38.59.

Deepings Swimming Club Head Coach Lynn Chapman said: “The Masters don’t get the opportunity to compete very often but they made the most of their opportunity at Calverton and Bingham meeting with great excellent performance.

“They worked hard in training and fully deserved their success.”