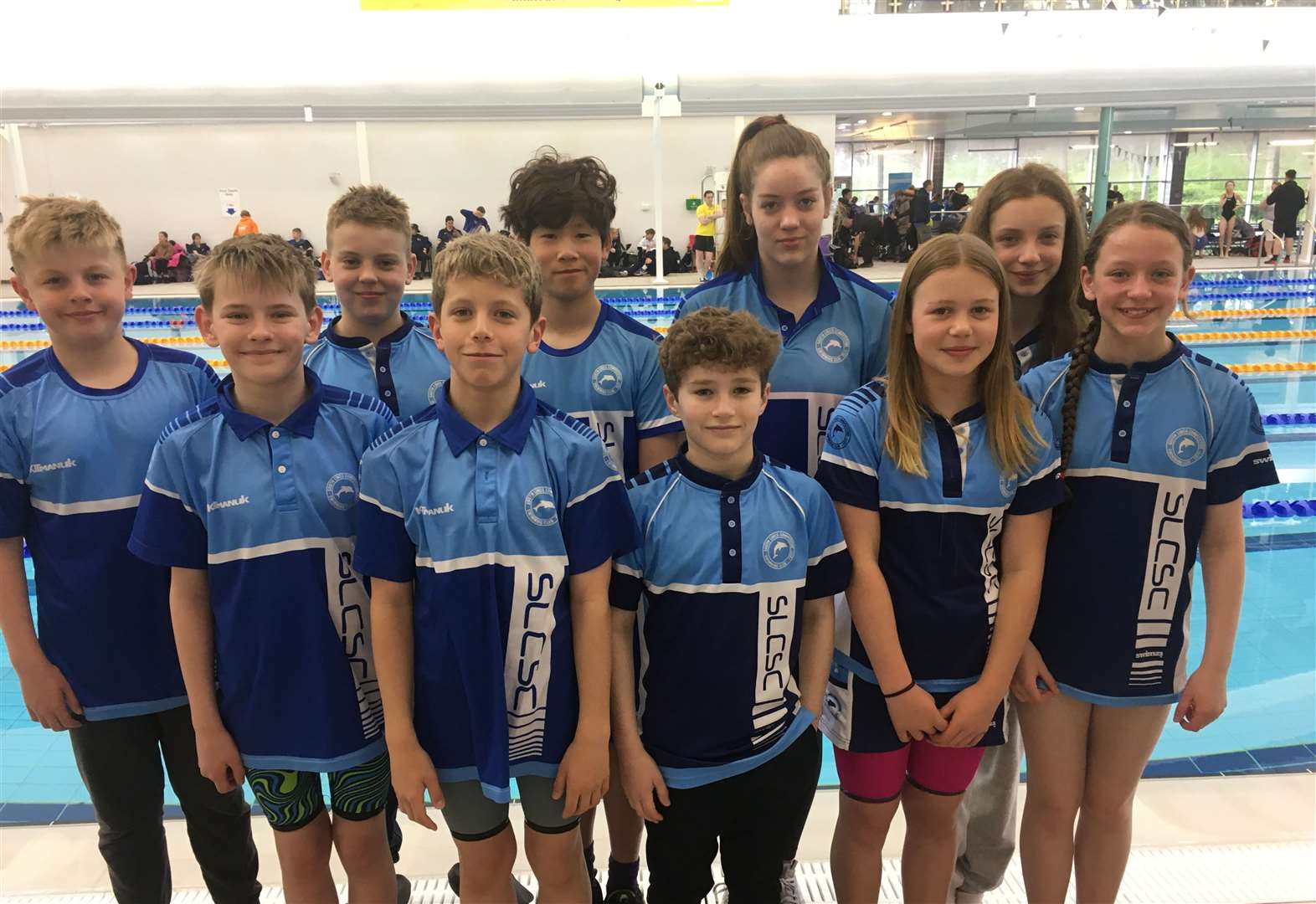 South Lincs swimmers were in action on the first two days of the East Midlands Regional Championships.

He saw the 11, 12 and 13 year olds take the blocks through strokes and distances, and they were joined by the girls in the 1500m freestyle and the boys in the 800m freestyle.

For many swimmers it was their first opportunity to compete in the regional championships, as due to Covid restrictions the event has not taken place since 2019.

However, the swimmers rose to the occasion and acquitted themselves well as they battled heats and multiple finals en route to personal bests and medals.

Aaron Sadler kicked off the action as he took on his favorite butterfly events.

Aaron swam the heats of 50m, 100m and 200m butterfly and qualified for the finals of all three distances for boys in the 11/12 age group.

He was also swimming in a large pool, in a 50m pool, for the very first time and handled the situation with great maturity.

In the 100 butterfly, Aaron set a new personal best in the heats of 1m24.90s, then improved that time in the final to a new standard of 1m22.38s to take seventh place.

In the 50 butterfly, Aaron set an excellent heat time of 35.33 seconds and in the final he fell just short of that mark and took a fifth place finish.

However, it was the 200m butterfly that earned Aaron his best result.

In the heats of this event, he set a new standard of 3.08.94 and again improved his time in the final, posting a new personal best of 3.07.35 and winning the bronze medal.

Charlie Bisby had a busy weekend of competition.

At 11, Charlie was at the bottom of a split age group, and competition was all about getting more experience on the course.

Charlie’s best performances came in the 50m and 100m freestyle, where he set new personal bests.

Frank Lamb started his campaign with a strong 100m butterfly that saw him qualify for the 13-year-old boys final.

He was able to achieve his goal of posting a faster time in the final than in the heats to finish in 1m14.78s, taking sixth place.

Frank swam well in the 400m individual medley, where he finished fourth in 5.42.37 – just short of his best time.

Frank was also a runner-up in the 200m individual medley, where he swam to a fifth-place finish in a time of 2.44.66.

His finest race came at the end of the weekend in the 200m butterfly.

Frank set a new personal best in the heats of the event of 2.43.33 and had a superb swim in the final.

Quickly at the halfway mark, Frank produced a strong finish in a three-way fight for the medals.

Frank managed to finish with a personal best four seconds in 2.39.98 and the bronze medal.

Kitty Lamb was also in action at the age of 11 in a double age group and gained valuable experience.

However, Kitty shouldn’t let her age be a barrier to qualifying for the final.

She swam to a new personal best in the 100m backstroke heats with a time of 1.18.83 to qualify for her first final of the weekend.

Competing against girls a year older than her, Kitty had a solid run in 1.19.31 to take a seventh place finish.

Kitty also swam an excellent 50m backstroke, qualifying for her second final of the competition. She once again placed seventh, just short of her personal best 36.97 seconds.

She scored a strong hat-trick in the longer 200m backstroke, where she lowered her personal best time by more than four seconds to stop the clock in 2.52.82.

There was also a two and a half second improvement for Kitty in the 100m breaststroke, where she set a new mark of 1.34.07.

Lucy Wilson also competed in the girls 11/12 age group and finished with a very demanding schedule as she continued to qualify through to the finals.

Lucy clocked a new personal best of 2.55.26 in the heats of the 200m individual medley to qualify for the final, where she finished seventh.

Lucy also qualified for the 200m breaststroke final, where she finished eighth.

Lucy then went down this time as she battled her way through the second half of the race to hit the wall in a time of 3.04.33 and claim the bronze medal.

Sigourney Bolton has produced a host of outstanding performances.

In Sigourney’s favorite breaststroke events, there were also finals to contend with.

Sigourney clocked a fast time in the 50m breaststroke heats of 39.37 seconds, then improved on it in the final to break the 39-second barrier for the first time, stopping the clock in 38.93 seconds to take fifth square.

In the 200 breaststroke, Sigourney swam a new personal best in waves of 3.04.39 and qualified for the final.

Again Sigourney was quick in the first hundred meters and produced a great finish, pushing hard for the finish to set a new personal best of 3.03.49 and claim bronze in the age group 13 year old girls.

Kieran Ng had a busy schedule with heats and finals in his 11/12 boys events.

Kieran set numerous personal bests throughout the weekend, including in the 200m freestyle with a new best time of 2.29.73.

A strong heat in the 200m backstroke saw him set a new personal best of 2.48.60 to advance to the final, where he took eighth place.

In the 50 breaststroke, Kieran bettered his personal best by less than a second and a half when he touched the wall in 41.35 seconds to advance to the final of this event where he took fifth place.

Kieran also set a new personal best in the heats of the 200m individual medley with a time of 2.49.08 and again reached the final, where he finished in seventh place.

Unsurprisingly, in the heats of the 100m freestyle, there was another personal best of 1.10.94.

Kieran’s best performance came in the 100m breaststroke with a new heats best time of 1.29.21 which took him to the final – and in a hotly contested race he managed to get his hands on the wall to the bronze medal.

Matteo started his campaign in the 100m breaststroke with a new personal best of 1.27.12.

In the 400m freestyle, he finished just short of his best to finish in 5.02.59 and take an eighth place.

In the 200m breaststroke, Matteo swam an outstanding elimination swim to better his personal best by more than two seconds to touch the wall in 3.01.73, making another final and finishing in seventh place.

In a back-to-back race with his nearest rival, Matteo took the lead with just 100m of the race to go and couldn’t be caught as he fought his way to a new personal best of 10.02 .95. He won the gold medal in his age category.

There have been more medals in the 800m freestyle for South Lincs swimmers.

Among the boys of 14, Oscar Goldsmith also won the gold medal.

In a determined swim, Oscar held his pace well as he hit the wall in 9.19.90 – just a second less than his personal best set a week earlier in Leeds.

Alfie Bisby swam the race of his life in the 15-year-old boys age group as he maintained a brisk pace from start to finish to dominate his race and hit the wall in a new personal best 9.08. 78, winning the silver medal in his age bracket.

Alfie was followed home by Alex Sadler and Oliver Sorrell as they in turn set new personal bests of 9.16.87 and 9.21.82 for fifth and sixth place respectively.

Hannah Bruce was competing in the girls age group of 13 and was able to qualify for several finals.

Hannah’s first final was in the 200m individual medley.

In her favorite race, the 200m freestyle, Hannah produced a strong run of 2.26.57 to advance to her second final of the weekend.

She managed to improve her lap time and hit the wall in 2.26.24 to take sixth place.

In the 50 backstroke, Aidan was just a tenth of a second off his personal best, finishing in 36.28 seconds.

Aidan’s other event was the ever-demanding 200m butterfly, where he swam to a new personal best in the event of 3.00.60 to finish in ninth place and narrowly miss the 13-year-old boys’ final.

Emily Briggs also competed in two events, and coincidentally it was also the 50m backstroke and the 200m butterfly.

Emily was swimming this last long course event for the very first time.

She swam hard, fearless for the big occasion, and set new personal bests in both races.