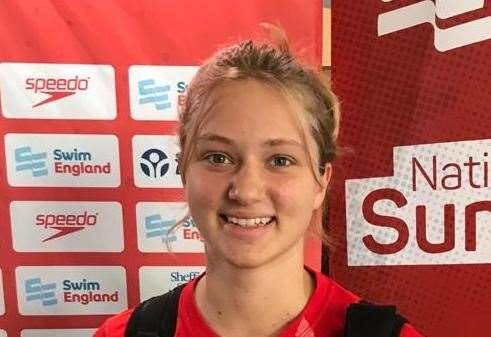 Canterbury teenage swimmer Jessica Sugden hopes her national success can inspire others at her club.

Sugden, 16, from the City of Canterbury Swimming Club, swam at the Speedo National Summer Meet in Sheffield.

In the 50 butterfly, she swam a personal best in the heats before finishing 10th overall in Tuesday’s final in the under-16 category.

“We used to be a really big club but the numbers aren’t as big now. But I hope to be a role model for them,” said Sugden, joined at the event by Dover Life Guard Club’s Tommy Goldup who finished 11th in his competition.

“Not many people remember people from the club going to nationals because it was a long time ago.

“It’s good to have fresh blood.”

Sugden was delighted with her performance after qualifying in Kent and then regional competitions.

She explained, “For my warmth, I wasn’t too nervous. But the day before, I was very nervous.

“I met my coach and another competitor from Dover. For the final I was very nervous.

“But I qualified 19th in the competition and then came in 10th.

“Covid has cut off a lot of my best years internationally. I really only had two weeks of training, but I still managed to get a personal best, so I’m so proud of myself.

Sugden also works as a lifeguard in Margate, and she added, “I love the water so much, so being a lifeguard is awesome.”

Jessica and her dad, Henry, then hurried back from the competition – before heading off on vacation to Croatia the next day!