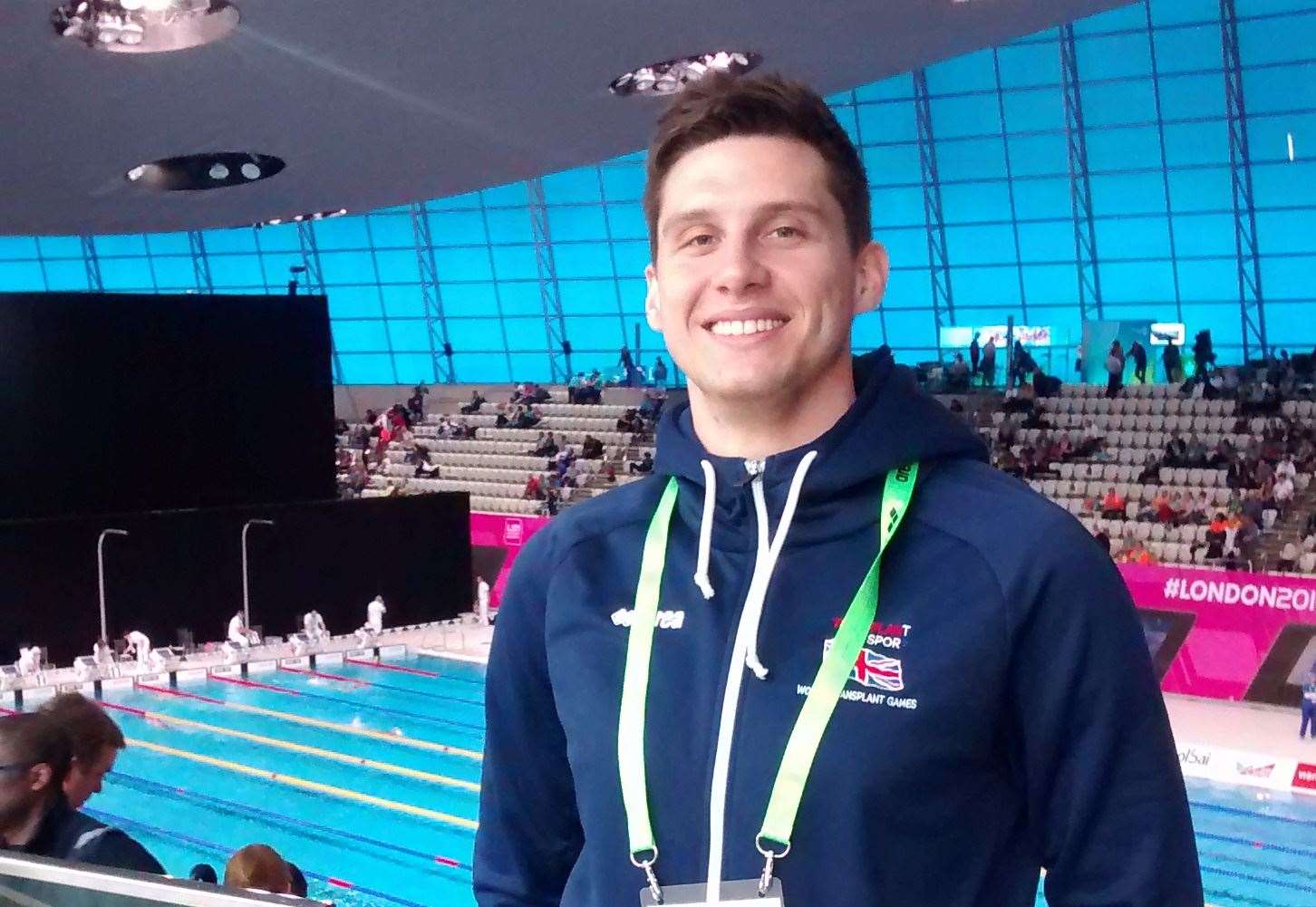 It was a shock when Liam Barnett answered his phone from a hospital bed.

We had agreed on a day and hour to talk about an impressive swimming career that delivered 26 gold medals on the world stage, and that was it.

But a postponement suggestion was flatly refused by the 34-year-old. For him, it was an opportunity without other distractions, apart from the visit of the medical staff, not to be satisfied to reflect on the sporting exploits but to highlight a certain number of subjects.

Barnett, a transplant patient who received a new liver in 2011, is hospitalized with ulcerative colitis, and both illnesses stem from a diagnosis of primary sclerosing cholangitis.

Sadly, it’s a central aspect of Barnett’s life – past, present and future – but it’s also linked to his relationship with swimming.

“Even today, swimming is my outlet,” he says. “It is indeed my medicine, it takes me to another place.

“You float and move all parts of your body in such a way that you propel yourself efficiently but as quickly as possible through the water.

“You really have to close your mind and let your body do the movement. You are also isolated, with just the sound of water rushing past your head.

“For me, it’s this meditative place that takes you away from everyday worries. You’re in the water, you’re concentrating on swimming, you’re moving forward.

Just by listening to the description of what swimming brought, you understand the connection and the meaning it has in Barnett’s life.

The sporting realm attracts such emotional language that is so often hyperbolic, both in competition and out of competition, but which is put into perspective by the battles faced by the member of the Cambridge City Swimming Club.

However, as the conversation heats up, nothing is off limits.

This stems both from Barnett’s fact-based approach and quite clearly from a positive attitude that was so important throughout his life.

Drive and determination come through loud and clear on the phone, and in many ways, swimming acted as an anecdote during his childhood, being a distraction from his studies.

“I was pretty academic, but not just academic, I was hard-working,” he says. “Swimming lends itself to this type of personality.

“The body is just not equipped to swim and you lose your fitness quite quickly, so you have to train a bit.

“I probably needed to vent a bit because I couldn’t do all the studies, so it just gave me balance in my life.”

In a discipline of hard work, Barnett reached regional standard – at the then-named Southern Counties Championships – and went on to Bristol University, where he also played water polo.

Moving to Cambridge for work, with Mott McDonald, where he is still employed, he joined the swimming club, but surgery for a hernia forced him to coach the masters team at first.

Barnett had been diagnosed with cirrhosis of the liver when he was 13, but just nine years later he needed an urgent transplant.

The speed of change has definitely been a shock.

“The whole liver failure thing happened very quickly, which is very dangerous, but it just meant that it actually didn’t really interrupt my life,” he explains, candidly.

“Having spoken and befriended many people in the transplant world, I think I was very lucky in that regard.

“If you had told me a year earlier, I would have thought it was impossible for me to receive a transplant in a year. My illness came on suddenly.

“I was very lucky in the grand scheme of things. It was very dangerous. I was close to death, but my life was not interrupted.

What stands out is such an optimistic approach, as Barnett describes in trying to seize the opportunities that may arise from these worrying times.

You see, you can’t help but admire someone who sat in a hospital waiting room before a life-changing operation and at that time was inspired by a poster for the British Transplant Games.

“As I was rushing to a transplant, I was actually looking at the dates for the next transplant games and I thought, ‘you know what? Once I get out of here and recover, I’ll do it,'” he says. .

“Having the UK and World Transplant Games on the horizon has given me real focus.

“Having the opportunity to go to the UK and World Transplant Games and meet such brilliant people there, I think has helped shape my life – at least after university – in a very positive way. .”

The admiration, however, comes as much in a sporting sense as overcoming health battles because Barnett wasn’t content to just compete.

His motivation was to be the best – when he found out there were world records at the World Transplant Games, he wanted to find out what they were and beating them would be the goal.

By the way Barnett describes these goals, you can tell there is a sense of satisfaction in how they were achieved.

He won seven gold medals at each of his first three World Transplant Games, then five at the last edition in Newcastle in 2019, losing his crown in the 50m breaststroke and 50m butterfly.

It’s all on the world stage, however, the British Transplant Games “feel like family”.

After a hiatus since 2019 caused by the Covid-19 pandemic, they will return to Leeds this summer and it’s about more than just sport, it’s a support network.

“For some people, it’s really important to them,” says Barnett.

“These kids will be isolated or feel a little strange because they’ll have scars all over their bodies or have to take all these medications, so having that peer support is really important.”

As we talk about Barnett’s relationship with swimming, he admits it’s tough right now, though he’s quick to add “don’t get me wrong, I still love the sport!”.

The problems are caused by ulcerative colitis.

He is often hospitalized and the sportsman in him explains why that is hampering preparations for the UK and European Transplant Games later this summer.

There is, however, an admission of being “mature enough to know that health comes first”, especially since there is a much more important factor.

With a crackle in his voice, Barnett explains that one of his biggest concerns is that he may not be able to swim any longer, or that it may be difficult as surgery may be required to remove his colon. and have a stoma, with a bag to collect body waste.

With remarkable candor, Barnett looks back in great detail at such an uncertain time.

“It’s something that upsets me, but the way I’m living my life right now is very unpredictable and I like stability in my life,” he says.

“It may not be possible or ideal for me to swim if I end up having a stoma and a bag, but I’ll take that over the current life I have right now because it’s really not a life.

“Every session I go to right now I have this in mind. I think ‘enjoy it because there might be a time when you can’t swim as much’.

“Even though I have an ostomy, my swimming time and the time I can devote to it may naturally decrease anyway.

“These are the things that I try to tell myself to try to understand the situation because I will be absolutely devastated to have this operation.

“Doctors and nurses say ‘you can always swim, you can get bags’, but there’s obviously a mental side to fighting there by walking around the edge of the pool with a bag of poop strapped to your body. .

“When they say you know how to swim, I think they may be referring more to ‘you can do a few breaststrokes when you go on vacation’, not training to be a competitive swimmer three times a week.

“It may be possible, but there is definitely a question mark over that.

“But, do I look at the opportunities? Yes, and I thought that if I had to have surgery, it might be an opportunity to find another sport in my life.

“Swimming is my meditative sport, but maybe there’s something out there that could fill that spot.

“Maybe one door closes, another opens.

“It makes me extremely sad to think about it, but wouldn’t it be boring to only play one sport all your life?”

It’s just a sign of the courage Barnett has lived his life in, and as he ponders a possible new sporting challenge, he’s had plenty of time to reflect on what swimming has brought.

PSC is a very aggressive autoimmune disease, just as it caused cirrhosis of the liver and eventual transplant, it attacks the intestine.

She was diagnosed with ulcerative colitis in college, but was much milder until the Covid-19 pandemic and lockdown.

“Sometimes I look at this and I’m like, you know what? Is it a coincidence that when I stopped swimming, stopped having this meditation, stopped having the opportunity to wipe the slate of stress clean every three to four weeks, did the accumulation of stress because I was working so hard because I don’t have anything else to do? ” he considers.

“I think stress levels may have increased, which of course is bad for any disease, especially an autoimmune disease.

“Is this what made my ulcerative colitis worse?

“It’s a progressive disease anyway. There’s no way I can tell now, but it crosses my mind.

“Has swimming kept me healthy all these years? Certainly, it has helped a lot of my health, absolutely.

It’s a question that can never be answered clinically, but 26 gold medals, an abundance of world records and many more successes suggest that swimming has been an overwhelming force for Barnett’s good.

*For more information on organ donation, go to organdonation.nhs.uk and for Crohn’s disease and colitis, visit crohnsandcolitis.org.uk.