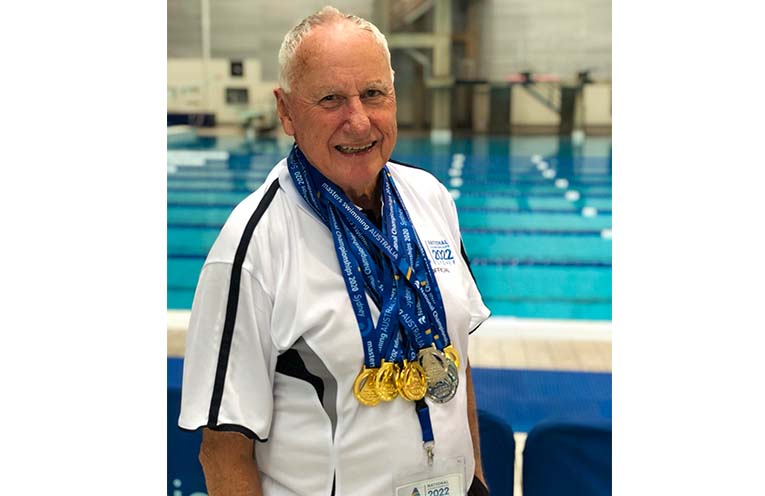 Chris has been an active member of the Myall Masters Swimming Club for nine years.

Previously he competed at the Ryde Masters for ten years and was a founding member of the Warringah Masters Swimming Club.

Christine Dunning, publicity officer for Myall Masters Swimming Club, says that since joining Myall Masters, Chris has always been a very dedicated and active member of the club.

“Chris has swum competitively at many competitions and over the years as a volunteer he has held the positions of Vice President and President as well as a Coaching Assistant where he passes on his knowledge and his experience to club members to improve their individual skills, technique and physical fitness.

Chris’ incredible ability was recently on display at the National Masters held at Sydney’s Olympic Park Pool in April, where he competed in nine individual events and two mixed relay teams over a period of three days.

Chris walked away with five gold medals and four silver.

Not only did Chris medal in the nine individual events he competed in, but he also broke two NSW records.

First in the 25m backstroke, then beating his previously held 100m backstroke record, smashing two seconds off his time.

“To achieve such success at 80 is truly inspiring.

“This was, for Chris, his greatest medal haul at a swimming competition and a highlight of his swimming career,” said Ms. Dunning.

The Myall Masters were able to recognize and share Chris’ success at a celebration at the Tea Gardens Hotel a few weeks ago.

These days, in addition to being a dedicated and active member of Myall Masters, Chris is involved with many Tea Gardens/Hawks Nest community groups.

When he’s not on the golf course or swimming at Jimmys Beach with the mules, he can be found working at Myall Coast Radio, of which he is a founding member and current president.

“Chris Lock is an exceptional director and an inspiration in so many ways,” Ms. Dunning concluded.